No race this weekend

For the first time since April 4th, I have a weekend without a race. I had originally scheduled an aqauthlon in California for this weekend but a variety of circumstances caused me to cancel that. and to be honest, I am 100% fine with that. Eight marathons in 7 weeks in 7 states with all that came with it really took a toll on me both mentally and physically. As I prep for the second half of the year (how the heck has my birthday come and gone and we are already about to start the second week of June?!) I needed the "break."

Still feeling the effects of my birthday run of 33 miles on Sunday, I decided to test out a new run here in SLC. Recently I had hiked to the top of Ensign Peak, which provides beautiful views of the SLC Valley. 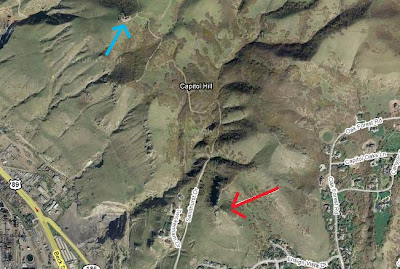 After checking out the vistas, I noticed a road that lead up to some weather station towers behind Ensign Peak and further up the hill. (EP denoted with red arrow and weather station with blue arrow).

Well as with most runners, if I see a nice curvy road, closed to traffic and winding up a challenging hill, the first thing I want to do is give it a run. So this morning, I plotted out a course and had myself a nice challenging 11.5 mile run to tackle.

We have had uncharacteristically chilly and rainy weather in SLC the past few days and the forecast calls for more of the same for the next week or so. Most places you venture in this great country all have a saying akin to "If you don't like the weather, just wait an hour and it will change." Everyone thinks their weather is special, and honestly, for the most part, it isn't. that is what weather does - it changes. But I am no longer surprised with how quickly weather does indeed change in the mountains. For the 4th day in a row, a day that started out beautiful quickly turned ugly. While I had put off my run for a little while trying to see if I could kick my lethargy into action, the dipping temperature and ugly skies finally cajoled me out into the daytime air.

After a warm-up of about 2 miles of mostly flat running, the climb began. I knew I had about 5.75 miles out before turning around and retracing my steps, and only 3 of those 5.75 would be really hard. But oy, was I not prepared for this run today! 1650 feet of climbing later I found my winded body cresting the peak at around 5600 feet above sea level. (click to enlarge the graph)


Salt Lake City behind me and the Great Salt Lake in front of me I was in a nice little place. I could see the Bonneville Shoreline trail snaking out before me, going up over the next mountain. "Maybe next time" I said.

Yes you did! Hopefully something like a nice big juicy steak!