As I wrote in my Blue Ridge Outdoors article, sometimes it is the smart thing to drop one of your goals.  Here at the Quad Cities Marathon, it made perfect sense for me to go from my planned run in the full marathon to cutting the distance in half and running the 13.1 mile option for half-marathoners.  I regret nothing about my choice at all.

As I met old friends, made new friends and have just a wonderful weekend in the Quad Cities area, I could not believe it had been four years since I had made the journey to this quaint cluster of cities nestled along the Mississippi River (and let's not forget East Moline, making it the "Quint Cities".)  I hereby vow, regardless of whether it is for the Quad Cities Marathon or not, I will not wait another 4 years to come here again to race, talk with friends and just enjoy wonderful mid-west hospitality.  The plethora of Chicago Bears paraphernalia sure doesn't hurt my desire to come back either (especially on cute girls.)

Prior to the race, I was honored to be asked to be the featured presenter at the Noodles Pasta Party.  I also found it funny that when asked what I fuel myself with I, at a pasta party, said I was on my way to go get a steak. But what I recalled about this exact room was how I had been asked by the effervescent Race Director, Joe Moreno, to stand up and give a few words about my 52 Marathon task under way four years ago.  They had not had the speaker in this room since then and here I was in the exact same place, speaking to just as many enthusiastic, smiling faces. Telling those in attendance that they should relish in pursuing the impossible, I had plenty of examples in front of me of those who were doing it - be they the invited runners who could run 2:09 marathons or those who were fighting their own impossibilities.


The Quad Cities Marathon and its related races were experiencing their biggest year ever, yet the races still had a small town feel in spite of full street closures, fire trucks with gigantic US flags blocking whole streets and the aforementioned talent on-hand to make the race seem far bigger than it was.  While I was disappointed to be not participating in the full marathon, I knew I would be able to at least fulfill a position on the pace team helping those wishing to run a 3:10.  My plan was to run as even-paced as possible through the first 8 plus miles and when the full marathoners continued on, I would keep the same pace onto the end so that anyone wishing to run a 1:35:00 for the half knew exactly where that time line was: me.

I preach going out slowly and constantly tell those who ask for one bit of advice while standing in front of me with a book chock full of it on the table in front of them (seriously, buy the damn thing already!)  that keeping oneself in check is the hardest thing to do.  Then I go out and run the first mile, which included an uphill onto a bridge, faster than I planned.  And it would have been even faster if I had not seen where the mile marker was and slowed my pace about 200 yards before we hit it.  However, after getting things more on track, with the aid of another longer hill and reeling in the troops, we were just about exactly on pace after the first 5k.  I told some of the runners they should congratulate themselves as they had just run further than about 95% of the people on the planet ever have or ever will run.  There was a slight cuckle and then silence as everyone realized I was probably right.

More importantly, I think people were wondering if I was right that the hills of the course- those we just conquered, were indeed the hardest by far as I said.  (They were.) The Quad Cities Marathon if nothing if not a pretty flat race, in spite of all the bridge crossings.


Onto Mile 8: 6:57, 7:05, 7:17, 7:13, 7:14
While running a course which contains an uphill or a downhill, I am not such an automaton that I will not allow the pace to slow or quicken on a hill simply because I MUST keep a certain pace.  In fact, it is hard to dispense advice about how to run these hills properly if one does not give a first-hand showing.  So a couple of downhills on the back end of the hardest hill helped us put a few seconds in the bank.   One runner asked me if I had to carry the sign with the pace and overall time on it the entire race.  I said I did.  There was a guy running right in front of me who almost derisively said, "Yeah but if yours hand gets tired, you can just switch."  There was a slight silence as everyone wondered why he had to make this sound both derogatory and ground-breakingly novel at the same time.  So without a beat I added: "That's what she said." ...and we were back to having fun.

(There is always one or two guys who like to run directly in front of me when I am pacing. I do not know why they do this.  Do they think they are too good to be paced?  Are they unaware that I am trying to keep a consistent pace and have a crowd of like 15 people behind me for a reason?  I am unsure but they get really annoying.  I want to say: "You know, if you stay right in front of me the whole time, I am more or less still pacing you.")

Rain on the day and night before the race had saturated the course in many places, even as the weather was cool, calm and brisk on race morning with sun light beautifully flitting off all the water.  as we ran aside the Mississippi, there were a few places on the more narrow bicycle path where water completely engulfed the road.  Some opted to run up on loose gravel which lead to the train tracks (risking a twisted ankle) whereas mostly simply splashed on through (risking feeling like they were five again and puddles were meant to be splashed.) Sure, the latter means you may get some wet feet and blisters later in the race, but what the heck.  I asked if anyone had ever done steeplechase because it seemed like we were doing so today.


Finishing up: 7:18, 7:20, 7:30, 7:22, 7:07, 40
When the 8th mile came and want and the signs showed it was time for me to split off and head back to finish, I was a little sad.  Feeling pretty tired already I was not a lot sad, though.  I told the runners to work together, make brand new best friends and try their best to keep the pace.  A few expressed sorrow that I had to leave and more than one tried to convince me to change my mind. (e.g., "I know you said you were just doing the half yesterday but I was curious if you had a change of heart.")  I was actually quite surprised when I split and turned to wish all the runners good luck that a vast majority of them did not follow me to continue on the half route.  Those who had been running with me were indeed going the full distance.  This made me want to continue on even more but I held back.  Not too often I am wise in my discretion but here was one solid time when I was.

After the split, the numbers of runners around me had thinned considerably so I just enjoyed the morning. I talked to a few runners here and there and took in the scenery.  We crossed one-bridge which had a criss-cross lattice working of metal under our feet and I was pleased to see carpet had been laid down for runners to traverse safely on.  As it was not the widest of carpets, runners formed a conga line and it reminded me of trail running on side-track.  On another occasion we crossed some more grating and members of the Air National Guard (unless I am mistaken about their insignia, in which case I apologize) were on-hand to make sure we used care and did not slip.  It was little touches like this that continued to make me feel like this is the way all races should be run.

As the end neared I was a little sad to see the day end.  However, I was happy to pace the 1:35:00 "group" about as close as you can get when I crossed over the timing mat in 1:34:57.  However, the best part was yet to come. You see, a group called Pammy's Team had asked me to help join them on the final leg of their relay marathon.  Pammy's Team is comprised of all Ironman finishers who each took turn pushing a developmentally challenged child through one of the various portions of the Quad Cities Marathon.  With five legs each and two teams, 10 children got to experience at least one leg of the course in special racing wheelchairs pushed by various finishers of Ironmans across the country. 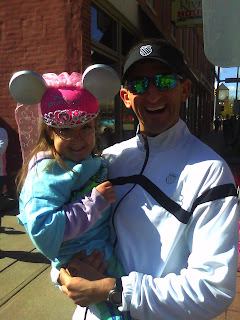 When each relay team got .2 of a mile away from the finish, all 10 children jumped in and either ran, were pushed or were carried the final portion so they could all finish together.  I was asked if I would like to participate and jumped at the chance.  I got to meet Alyssa, a precocious little 5 year old who my friend and local massage therapist, Laurel Darren had pushed earlier in the race. Alyssa took a shine to me and I got to be so honored to be the one who got to carry her across the finishline later in the day.  You can see Alyssa, wearing the Disney Hat Laurel herself wore in a marathon and being all smiles (and a little bit of chocolate on her hands and cheek) in the picture to the right.

While I had missed the Quad Cities Rollers, (the Roller Derby ladies from the area)  at the mile 9 aid station for the marathoners, I was privileged enough to attend one of their practices the night after the half-marathon.  Having already tried my luck at the riverboat casinos earlier in the weekend I did not want to push it further and declined any offers to strap on skates and get my ass kicked.

All told, I am going to have to say I enjoyed just about every second I spent in town this weekend.  If you get a chance yourself to make it here on race weekend  (or more accurately, if you have the common sense to make the chance) you will not be disappointed.

Going to have to find out their personalities but both had a leg up on the competition with those jerseys!

We are loving the book. Hope you enjoyed the chocolate milk at the end. Two PRs for our family in the half!