I love bringing cool news to my readers.

My running friend Sam Felsenfeld is taking on quite a task. But he is used to doing that already.

In 2010, Sam is going to try to run 60 marathons in one year - all to raise money and awareness for Train 4 for Autism. Sam's desire to do so rises from his only family's personal relationship to the neurological disorder. Sam's son, Jack, born September 16, 2003, was diagnosed with autism shortly after he turned 3, although he has been in constant therapy and treatment since before his second birthday.

He is showing signs of progress, but has very limited speech and struggles with communication and social interaction.

So Sam wanted to make a difference. Hence, Operation Jack was born.

But this is also a story about Sam as well. Not only has Sam suffered from a severe neck injury that almost left him completely paralyzed, he has battled an addictions to cigarettes and apparently, for his love of Big Macs. Sam's weight ballooned to 261 pounds before he finally decided to make a change in his life.

Now, Sam is hovering right around 200 lbs (sometimes over and sometimes under) and has to be one of the fastest big runners out there. Agonizingly close to running a sub-3 hour marathon, Sam has pulled his large, much more toned body to a 3:00:04 marathon. 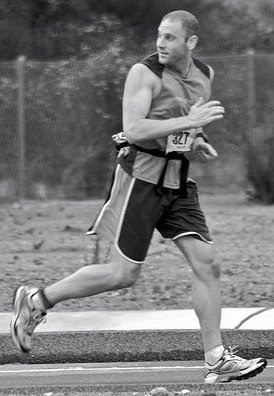 Now Sam is not one to blow his own horn so I am doing it for him. Plus I am telling him that if you are trying to raise money for a cause, you have to get over any desire to not tell people what you are doing. There is just too much going on in the world for people to find out what you are doing unless you talk about it.

Regardless, if you want to follow his incredible adventure or want to run with him, check out his schedule HERE. I am sure I will be following up with him throughout the year next year and wishing him the best of luck.

He will soon learn that the running is going to be the easy part! I hope to convert him to my disdain for the airline industry sometime around St. Patrick's Day.
Posted by Dane at 7:14 PM

That is very cool stuff. I guess his bib number will have to be #60.

What an amazing guy! Thanks for sharing his story. I just signed up for the Park City Marathon with Operation Jack....Aug. 21, 2010!!