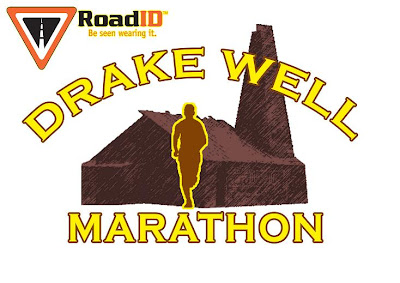 Sure there were glitches and things that could have been better. The weather, for example, was not only unusually warm and muggy, even for August in NW Pennsylvania but it was a huge shift from the days leading up to the race. If humidity can be more than 100%, we had it. but the fact that the sun stayed away until the very last finisher was close the the line at least made it not horrible.

A torrential downpour removed all of the course markings at 3 AM which had me me out at 4 AM with cans of orange marking painting and a flashlight, making sure that everything was still properly marked.

A table we set out for volunteers to place drinks on at the first aid station went missing. In its place a Red SUV, set (not unlike the ones in the below picture) in a ditch on the side of the road had taken its place somewhere between midnight and 4 AM when I had been out on the course. 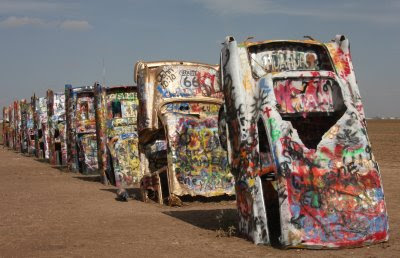 Fortunately, there was no one inside, no signs of injury and the police were called by me after wondering if I should just wait another hour until all the runners got past mile 2 (where this aid station was) before my call to the police potentially had the road closed and the marathon scrapped. Below is the real picture to show I wasn't lying. 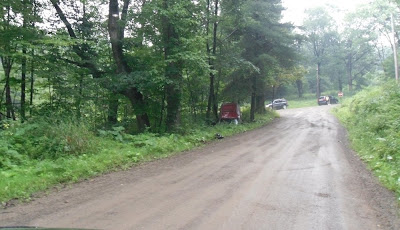 I am still sorting through all the emails, both to my personal account from friends who ran the race and through the Drake Well Marathons' email after I travel back to Salt Lake City today. A few complaints pepper a seas of compliments to the volunteers out on the course, to the organizers of the race and to the city itself. No fewer than 3 aid stations were set up by townfolk not involved with the race, in the scant 3 miles that ran through Titusville's actual downtown area limits. This did not go unnoticed by all he runners who were extremely thankful.

As a vast majority of the runners are close friends or old friends reacquainted, I cannot possibly begin to mention all of them without leaving someone out. I will try to hit on a few and also some random notes along the way.

* I made the beginning race announcements and scurried over the bridge to hop into the lead car (I drove the first 9 miles of the course as the lead vehicle to make sure that everything was still set up, volunteers were on the road and traffic control was in place). 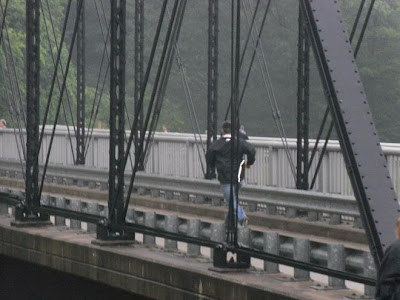 Before doing so, I was very happy to have Titusville High School and West Virginia University standout runner Mac Knapp show up and I handed him the starter's pistol to officially get the runners underway. Few more poignant people could have kicked off a race in Titusville. I told Mac that my best time in a marathon still beats his. Mostly because he has never run one. But that is just details.

* Back during Fiddy2, my friend Jason Roberts had made it a point to be on the course of one of my marathons for me for support and applause. I could not have been more honored that the former center on our high school football team and current member of the US Military, made his first ever marathon the one I was directing. As he entered the final .2 of a mile to go around the track, my mother was there to guide him on. He looked her dead in the eye and said : "Your son is crazy." So glad you finished, Jason! 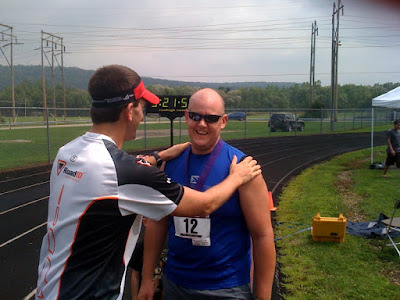 * I wrote about David Terrill HERE. I could not be happier to report that David ran a stellar race, on a horrible humid day and took second overall in a time of 3:03:26. Great job David.

* 17-year old Peter Burgos from Vermont finished 10th overall in a time of 3:23:40. That is a pretty fantastic time for such a young age.

* Issie Pelc, who in April of 2006 discovered he had cancer and underwent 18 weeks of chemotherapy treatment, ran his 29th consecutive monthly marathon and made the Drake Well Marathon his 50th lifetime Marathon! You can follow his quest HERE. 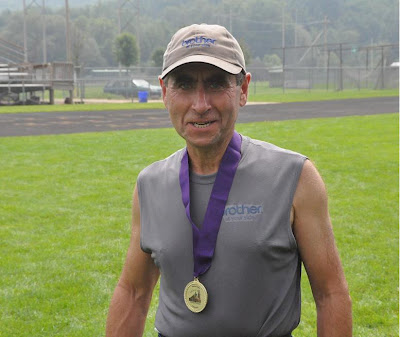 * Rick Smith of Indiana, a former NCAA basketball champ and easily the tallest runner in the race at 6'5'' (ish) celebrated his 60th birthday (just a few days prior to the race) by competing in the highly competitive 60-64 age group. Just a few weeks younger and he would have placed HIGHER in the 55-59 age group! Let's hear it for the sexagenarians! (And no, those are not people who just eat sex.) 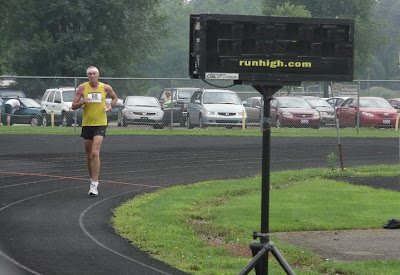 * One of the oldest competitors, Donald Siefers at age 72, ran a stellar 4:19! Still quite feisty, he asked where he placed overall and when I said: " I think in the top 50!" he rolled his eyes and said: "I know that. I bet it was closer to the top 40, son." Probably didn't know he was snapping at the RD. And you finished, 49th, Donald. 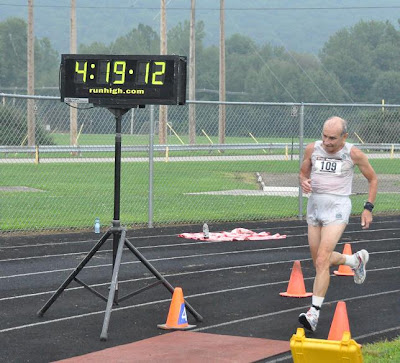 The absolute last person to cross the finish was one Donald Kartsen, 48 out of Florida. Don's opinions were extremely important to me as the last finisher so we spoke at great length. Finishing in 6:36:50, Don had to experience the heat, humidity, and unlike most of the other competitors, a bright sunshine that began to beat down from above. I quizzed him on our volunteers and course marshalls, who had been out and about since 6 AM. I thought that perhaps he had nothing but praise about the aid stations, the volunteers and all the enthusiasm shown by the town for everyone of the runners. Hearing this from the person who had to be absolutely exhausted and had every right to be a little cranky was music to my ears.

From first time finishers like mother of six Teresa Redmond who entire family drove from Michigan in a retired Oscar-the-Grouch-green school bus to support her (I hope someone got a picture) to those with over 200 marathon finishes to their name like Rick Rayman of Ontario, Canada, the race was full of 1,000 stories.

Whether I will be involved as a director or a runner or anything next year remains to be seen. What I do know is that those involved will give their all and those running are in for a treat. There are indeed some hills in the beginning, but then the runners get to experience 15 miles of flat trail that runs right next to this: 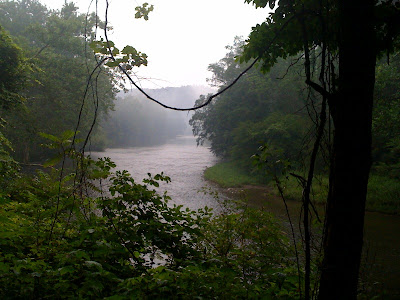 Few will be disappointed!

Of the registered marathoners and half marathoners (whose stories I regretfully did not get a chance to learn as much about):

I am proud to have been able to be part of such a diverse group of runners and can see nothing but this event flourishing in the future. Plans to tie it in with other local marathons have begun. But I want to personally thank all of those involved, both running the race and helping TO RUN the race. Most specifically, I want to thank my family for doing double and triple duty on thankless jobs, the Smith family from Indiana who showed up to support a runner and helped run a race and the countless volunteers out on the course who made this race possible.

Thanks for putting on the marathon, Dane! Was a great event and a lot of fun to catch up with people, including you, that I haven't seen in a while. Congratulations on an awesome day and look forward to seeing ya at another race soon!

Thanks Dane for putting on a great race. Can't imagine who complained, but I can say that the bike trail is flat, but at a grade (at least it felt that way all the way up, but then it never seemed to go down). Special thanks goes to the red shirted guy on the bike who raced cups between aide stations, to the ranger who helped out at mile 21(?- I think I was delirious by then), and to whomever takes care of the park (and placed a bathroom around mile 21? as well for my not so happy stomach - hopefully in the fog no one saw my quick pit stops along miles 18,19,20, 21).

And your Mom is super! Thanks again.

Thanks alot dane that was my first marathon and it was a great experience, i just hope to be doing it again next year.

Congrats Dane! I wish I could have been there, but Baby Bea is kind of needy right now! I know you made T-ville proud.

Very nice race. Have you thought about doing the North Coast 24-hour race in Cleveland on Oct. 3-4? This year, it is the site of the U.S. 24-hour National Championship. Should be a good time!!

Thank you and everybody who made these races possible. I traveled up with my dad, and we enjoyed our short stay in Titusville. (Thanks also, Blue Canoe.)
I only experienced the half-marathon, but I thought the course was terrific. Well done, all, and thanks again for your work and encouragement.

That is a really great race report. Great pictures and way to handle many different situations under so much pressure. It sounds like a great race and it seems to have had a great race director. :) Thanks for sharing.

Thank you for bringing this race to Titusville! I'm still on a high, this was my first big race. It helped me to complete a personal goal and to continue on to more goals!!! I look forward to seeing you next year as well as every one else. And thank you to all those who helped. Every one was very encouraging!!!

Great job, Dane! I knew you would put on a great marathon - again. I wish we could have been there to help you out (or to run!). Maybe next year. I just had a great thought...the DWM might be great for my brother's first marathon soon.

Congratulations on a job well done.

Dane, Julie and I had a great trip from South Florida to run the half. I was impressed with the quality runners (especially the local runners who broke my heart at miles 9 and 11 when it looked like I was going to take 1st...). Nothing beats a small town race, from the general feel of it to the great people. If you put it on every year, we will be back for more. I am sure I will see you at a race in the near future--Chicago is next marathon for me, but looks like you have another race that weekend--Boston in April maybe? Thanks again, and lastly the fact that you greeted every runner at the finish didn't go unnoticed by everyone we spoke with after the race. Thanks again!

Great recap! Sounds like a great race. I definitly want to see a photo of that bus :)

Dane, I was last place but you made me feel like I finished first.

As a Titusville alum I was hoping to make it over to watch/volunteer but was not able to, but great job. As a race director (The DamTri Triathlon at Woodcock) I know what you went through. Especially the part about losing course markings! Only for my race it was discovering at 5 am that someone had gone over the trail sometime the evening before the race and messed up a lot of the run course arrows just to be funny. But I'm half convinced the effort to put on a race is harder than doing one!