I am saddened to report news today that a running friend of mine, Chris Douglass, was killed in a car accident this weekend in Colorado. As is often the case in these events, the driver of the other vehicle was reportedly under the influence of drugs and alcohol and survived the crash unscathed. 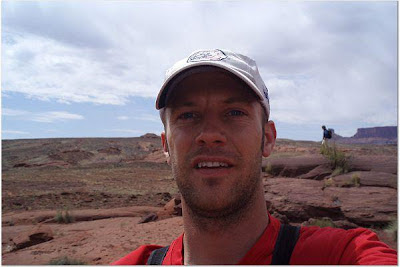 Chris was preparing to begin a walking excursion from Denver Colorado to his home state of Maine in the upcoming weeks. In fact, Chris was heading to the campsite from which he was going to be starting his three month walking journey when he was involved in the crash. While Chris and I only met a few times in real life, we were able to communicate online far more often than I do with people who live just miles away from. While I was celebrating my birthday, Chris lost his life.

More information about his quest can be found HERE.

My thoughts and prayers go to his friends and family. In addition, with his girlfriend Amy still in the hospital, I hope we can lend a second to keep her in our prayers as well.

Condolences may be sent to his parents: Jerry & Linda Douglass, sister: Bethany Douglass and brothers: Dennis & Jerry Douglass Jr. at 2 Mockingbird Lane, Lisbon, Maine 04250.
Posted by Dane at 9:37 AM

Wow. When you started off with "a running friend of mine..." I didn't expect that it would be someone I actually knew in some capacity. We corresponded for a while online and I met him in person when he came down for MCM. He had such a wonderful nature and I'm very sorry to hear this news.

Sad to see any kind of news like this. Unfortunately this is becoming more common as each day goes by.

Chris was my best friend and we had just cofounded the site you link to. It is a horrible tragedy that we have lost such a passionate person. Thank you so much for your support.

This is very sad about Chris. We pray for Chris and his family we are also praying for Chris girlfriend who was in the car with him
Best
Lisa

Very sad. I had the opportunity, though brief, to meet him in DC last year. Prayers to everyone.

It always seems so unfair when young people die, but especially so when the death was caused by someone else being reckless.

Sorry to hear the news. Cherish the memories you had and the times you shared. Will keep his family in my prayers.