Brooksie Way Half Marathon - My Run With Boston Billy

I wrote about this race earlier in the week, an inaugural event put on by the same wonderful people who run the Crim Festival of Races HERE. I was eager to both speak at the expo and run the race. Nothing about the weekend disappointed.

In giving three speeches at the expo I made many new friends and once again realized how small the racing world is. One example is that one woman heard me speak at Akron last weekend was running this race this weekend. While she was unable to stay around to hear my speech this time she let me know how much she had enjoyed my talk in Akron. Hearing things like are the reasons why I travel this country to spread my love of running.

Another reason is the subtitle of this blog. While taking some time to help educate people on the wonderful product The Stick, I noticed that right next to their booth, Bill Rodgers was signing books. Yep, that Bill Rodgers. Four-time winner of both the NYC Marathon and the Boston Marathons. Owner of a 2:09:27 marathon personal-best. The man who, in 1977 won the Fukoka Marathon making him the only runner ever to hold the championship of all three major marathons at the same time. Boston Billy. Any runner who is a runner would be happy to meet him. 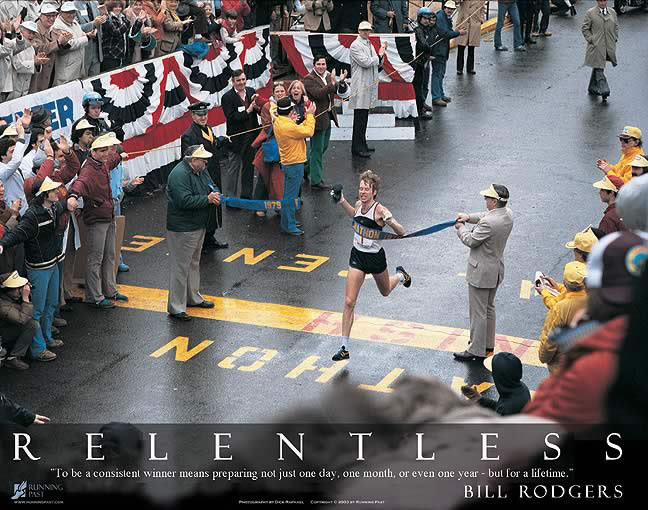 I was lucky enough to meet Bill at the Dallas White Rock Marathon in 2006. The man must meaning 10,000 beaming fans a year. I knew there was no way he would remember and I was not expecting him to do so. Therefore, when I got in line, purchased his "The Complete Idiot's Guide to Jogging and Running" for signature, I only introduced myself as "Dane Rauschenberg". Bill's eyes showed a look of recongnition and he said "The speaker who did 52 marathons in one year?"

Needless to say my jaw dropped. I picked it off the ground and affirmed what he had said. We then spoke at length on a number of topics before I realized I was holding up the line. He then asked me if I was running the next day in the half and I said I was. We talked a bit more about pacing for the race and it ended up he planned to run what I was running unofficially for the Running Gear store: 1:35. Bill then said "Care to run together?" A phrase that was akin to what a bear does in the woods almost came out of my mouth but I think I just nodded like an idiot. Next thing I know, this cloud with the number "9" on it slid under my feet and carried me to my next speaking engagement.

The rest of the day flew by and in spite of a lingering head cold which had kept me awake the past few nights, I was soon sound asleep. 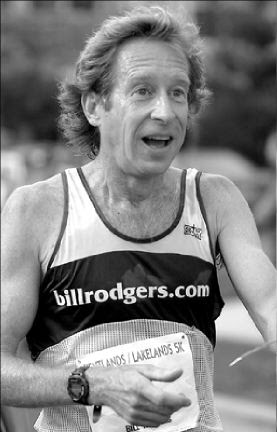 When I left Salt Lake City to come to Michigan, it was 85 degrees. Race morning I woke up and it was 36 degrees. Brrr. I usually prepare for all weather but for some reason wasn't fully ready for this huge drop in temperature. Fortunately for me, I had received in the mail a shirt from ROAD ID to wear in my upcoming 12 Hour run in San Francisco. (In case you missed my update, I had to downgrade from the 24-Hour option due to a foul-up with my registration.) Usually I wear sleeveless shirts until the temperatures get ridiculously cold, so I was extremely lucky to have this shirt on hand. As such, in the cold of the morning, I sought out Boston Billy at the start.
With his ever-present smile and tussled hair, I found Bill just a few minutes from guntime.

"Hey Dane! Ready to run?" he said. "Sure am!" I replied. We were then treated to two separate singings of the National Anthem ( I am not exactly sure why but I didn't complain). While we awaited the start of the race (delayed slightly - the only slight negative of the entire race) a perky woman in pink chatted both Bill and I up, with no idea who Bill was. I told her even if it was her first half (it was) she needed to go home and do some research as she was standing next to a legend. Michelle was her name and when she found out what we were running told us she was going to stick with us. Flanked by Bill Rodgers on one side and a pretty woman on the other, I was having a good day.

I had, as always, mapped out the course prior to the race and was surprised how similar it was to the Akron Marathon's race course. As such I knew the first 5ish miles were mostly downhill. We told Michelle that she needed to take these miles easy as the remainder of the course was going to be more challenging.
She listened to our advice and 44:13 later we finished the downhill and began the first uphill section at mile 6. Cheers from random spectators of "Go Bill!" echoed the sentiments of runner who we passed "Thanks for coming out to the race, Bill!"as Michelle said "He is famous, isn't he?"

To Mile 10:
Even as we began the climb up the hardest part of the course I was still ecstatic. I had been peppering Bill with questions about the past and he seemed more than happy to share his stories. Michelle was asking for more immediate advice on how to run the race at hand. I laughed inwardly how I was trying to plumb the depths of Bill's mind while Michelle was trying to scrape my vastlessly less-impressive bucket of running knowledge.

Bill liked to run on the grass on the side of the roads so I found myself shadowing him from side to side as we sought out the softer running surface. I realized that Bill must have tens of thousands of miles on his legs and anything he could do to keep his legs in better condition was worth it. Plus, hell, he IS 60 years old!

As we started to crest the worst part of the hill's Michelle was running perfectly and I could tell Bill definitely wanted to pick up. We had run nearly perfect pacing through the first half and were somehow still keeping the pace even as the road rose in front of us. 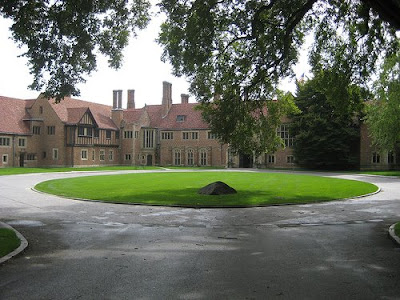 Final 3.1 miles
Finally hitting some downhill, we convinced Michelle to run her own race and leave us behind if she felt she could. Bill and I ran stride for stride passing a few runners every little bit as Bill hung to the grass on either side.

Finishing on the beautiful campus of Oakland University just a short trot from where the race started, we could see Meadowbrook Hall in the distance.

Cruising down a gorgeous expanse of green on either side of the road, we passed by some bleachers and prepared for the final few hundred yards of the race. In a canopy of trees up ahead we saw the clock. Counting mercilessly upward, Bill and I eyed it as we ran in step for step. bursting through the trees and into the sunshine in the courtyard of Meadowbrook Hall, you can see below what we saw. 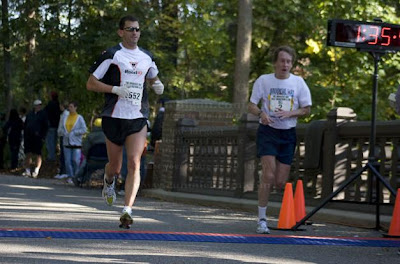 Bill smiled broadly, shook my hand and gave me a pat on the back. Words can't describe my happiness. As we exited the circle and a few friends surrounded Bill, I prepared to leave him alone. Before I left however, Bill not only reminded me that I had to tell him when my book was coiming out as he wanted to sell it from his store in Boston (!) and also introduced me to his friend standing nearby: Greg Meyer. Besides winning River Bank Run in his home town of Grand Rapids, MI seven times over, Greg is most notably remembered as the last American Male to win the Boston Marathon.

It is going to take a solid week to wipe the smile off my face.

As for the race itself, the Crim people did a wonderful job. Plentiful water stops, volunteers who directed runners everywhere they needed to go, gorgeous finisher's medals and a great mixture of roads and trails, it is obvious that while this is the first Brooksie Way race, it is not the first race the Crim people have put together.

Two thumbs up from me and everyone I spoke to about this race. In a personal note, my friend Leah set a five-minute personal best taking 6th female overall and her guy friend Leo, placed 5th overall in the race, only getting to the finishline after the speedsters of the Brooks Hanson Distance Project. It gets more difficult each weekend for my enjoyment to be topped, but somehow it does.

Let's hope that trend continues in Baltimore in just 5 days!
Posted by Dane at 12:18 PM

Missed you in St. George, Dane. Weather was rainy and high 50s - perfect for me, but others didn't like it.

Sounds like you passed it up with a great experience though. Bill is a great guy (I have met him several times and we even won a race together once) - so personable and humble. Great run too.

That is the coolest, Dane!! I am so happy that you got this opportunity...you know I'm a huge fan of Boston Billy, having actually been alive and aware when he was winning those races. ;) Thanks for sharing this story, and congrats on a great race. I can't wait to see your race souveniers! :)

It was so great to meet you this weekend. Enjoyed listening to you speech about your experiences and sharing your love of running with all of us. I might not be a runner, but your passion for the sport easily translates into the walking that I love. Congrats on getting to run with Bill, too!

~Pam
(Yes, its the crazy expo lady who admitted to stalking your blog.)

So glad you enjoyed your experience at the Inaugural Brooksie Way Half Marathon! We appreciate your comments and hope to see you again next year.

Your appearance and talk at the Expo was excellent! Glad I got a chance to hear it-

im a runner from detroit that ran both the akron (love my new defyance)and brooksie half... while walking into the expo i had to do a double take when i saw bill sitting at one of the boothes, it was kinda funny, i dont think many actually knew who he was, nobody was in line to see him... now i'm gettin ready for the Detroit... looking for the BQ, hopefully some of billy's magic rubbed off on me...

wish i could have run with you guys, i ran some friends through the first 10 at about an 8:20min pace before opening up and finishing 1:43... nice course...
akron definitely prepped me for the hills...

Dane! Now that I know who you are, I am the guy in the yellow singlet hanging with the three of you at least until mile 10.

Thats awesome Dane...what an amazing experience...or series of experiences for you! Great work as always!

I need to get that danged stick.

If you see Abby in Baltimore, give her a big hug from me, will ya?

Missed you too! Glad you liked it!

Pleasure was mine. thanks for making my trip special.

I hope indeed to be back again next year to help grow this wonderful race!

You didn't leave your name!

Great running with youi. Way to go on the 3 minute PR!

That is a really freaking cool story. Congrats!