*I wrote about this race  earlier in the week.  I suggest you take a hop over there and give it a quick read.*
As 100 or so runners and walkers lined up to do this 5k in the honor of Johnny Carlock, the sun broke through a little cloud covering and warmed the skin of those standing by. The owner of the running store sponsoring the race, Mike Stallings, said a few words about Johnny who passed away.  When he inquired which year it was that Johnny had died, making sure he got the right year, Johnny's mother standing nearby bravely answered with tears in her eyes.  So many races are run in the honor of something or in memory of another thing that we forget that human aspect of these races and how actual humans are affected by them.  No parent should ever have to outlive their child.  To see both Rachel and Scott, Johnny's parents, realizing they could either just mourn, or mourn and also do something positive with their sadness (and chose the latter) was really touching. 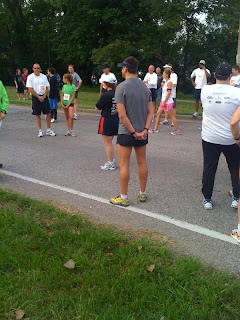 Taking in the entire scene seconds before the race started.
I thought about writing my usual mile by mile breakdown of the race.  And for those who like the running stats portion I ran a 5:45, 6:09 and 6:02 for each mile.  I was exceedingly pleased with a time of 18:36 or so for this 5k given
* I haven't done a 5k in over a year
* never was a short distance guy to begin with
* overslept and woke up 37 minutes before the race started and
* had this for dessert the night before. 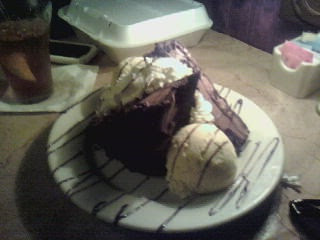 This was just ridiculous.  Somehow my steak dinner wasn't enough and I felt I need another 1500 calories.
But my breakdown of this race has more to do with the people there. Believe me, I love the atmosphere and camaraderie of larger races.  Pomp and circumstance. Vendors and speakers.  It can get you giddy.  However, recently when talking to some friends who had never run anything other than than large mega-marathoners and lamented the idea of even trying a race which "only" had 1,000 people in it, it made me think that more and more people need to experience these small races and see the enjoyment which can come from running without all the accouterments.

The 5k could easily handle a much bigger field and present locals with an awesome chance to start their weekend with a new PR.  It is a simple course heading out for a little over a mile, making a right turn, going one block, making another right turn and heading back.  Flat, with no ankle-breaking turnaround in the middle of the street and next Falls of the Ohio State Park, one could run a really fast time here. 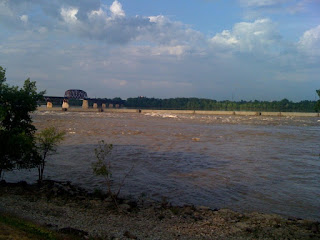 Recent massive rain made the normally placid Ohio River in the backdrop raging with whitecaps.
After the race, the directors presented quite the door-prize raffle with a plethora of gift certificates and even a flat screen TV for one lucky fella.  Quite the haul for a $25 race registration.  With good people, a great course and a heck of a lot of prizes, I can only hope that the local community continues to get behind the race and keep it going for many years to come. 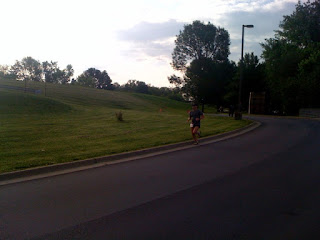 Happy it will only hurt this much for another 20 seconds or so.
Posted by Dane at 1:02 PM

Thanks for the recap Dane. This is my favorite race and I'm glad you enjoyed it. Hope to see you again next.

By the way, thanks for including me in the pic above :)