In the days after the half-marathon I ran this past weekend I have been more sore and more tired than I ever expected I would running a race that is "only" 13.1 miles long.  Without a doubt my  body is not used to trying to run fast over a such a short distance.  So, what better thing to do than run a 5k race this weekend?

Well, the better thing would be to be able to couple it with visiting one of my best friends on the planet, doing a book signing at a great running store and to not just run any 5K but help one that has a great cause behind it. 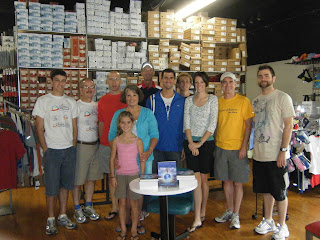 Said store and said best friend with way short hair to my left.

Johnny's 5k Memorial Run is a race created in memory of the late Johnny Carlock, who at the age of 24, in October of 2005, began experiencing back pain and difficulty breathing. Johnny was found to have a tumor in his chest and was diagnosed with lymphoma. After three unsuccessful rounds of chemo Johnny's next step was a Stemcell Transplant. Through it all, Johnny suffered through GVHD,  had both his liver and kidneys begin to fail as well as a plethora of other side effects.

By October 2006, Johnny was back home and his first CT scan proved that the tumor had shrunk and that the transplant was working, However, on Thanksgiving 2006, the GVHD came back and sent Johnny back into the hospital. After a short stay where it looked like Johnny would full recover he was soon back in where tests revealed an infection for which there is no cure. A week later on December 26, 2006, just three days after his 25th birthday, Johnny passed away.

This race is meant to continue on Johnny's dream of helping the doctors and staff find a way to make the stemcell transplant process for those who have to undergo it, a safer and less complicated process.  To be asked to be part of this race is both and honor and a privilege that I am happy to do.  So, even though I have every thought in the world that the 3.1 miles of hard running is REALLY going to kick my butt, I am looking forward to this weekend.

Race registration is still open and I invite those in the greater Louisville area to come out this Saturday and have a wonderful time either running or walking (there is a separate walking division) in this event.  I look forward to seeing you all both at the race, as well as at the book signing at Pacers and Racers the night before at the packet pickup!
Posted by Dane at 12:07 AM

It was great meeting you this evening at P&R. Good luck tomorrow. I'll see you there.