Let's get the obvious stuff out of the way first, as I am sure you will read it elsewhere on some other blogs and recaps.  There were some small inconveniences with the first running of the Freedom Half.  Most noticeably were not all of the packets being available the day prior to the race (making some runners pick up their packet on race morning) and he race starting late as a result of that.  Sure, this was nothing any of the runners would want and I can attest that the race director most assuredly did not want it either.  But as I said to the RD, as he pulled triple duty doing his own job and that of others who apparently hadn't shown up, I honestly feel that every runner should be required to volunteer at a race before they ever run one.  It would be amazing how many yappers would stay shut if they all had to be the poor sap behind the table taking the business end of a hissy fit from some person with an over-inflated sense of entitlement. It stinks the race started 20 minutes late.  Oh well.

There, with that out of the way, let's talk about the race!

I had a pleasant surprise for me at the start of he race when I randomly ran into a running friend from my days of living in DC.  Andrew just happened to be in Park City for a few weeks and deiced to run this race.  As he warmed up next to me, I thought: "Nah."  But sure enough it was and we used the time of the delay of the race to catch up.  See? Effective use of a minor inconvenience.  I knew with Andrew's speed he would definitely be in contention for the win.  I gave him the lowdown of the course and we both prepped for the gun.

The oft used for racing Emigration Canyon gave us runners just shy of 6 miles of gradual downhill running (~700 feet of total loss) to get the wheels moving.  For the first quarter of a mile I was in third place but knew that wouldn't last.  Andrew soon passed me and then about a mile later another runner did as well.  I thought 5th would be a nice little place to stay and stay in that position until about the 4th mile.  It was then that one runner really put on the speed and passed me and began to make an assault on the runners in front of us.

Around mile 5 another runner passed me but his speed ebbed and flowed so much I did not know if he knew what he was doing or, like me, ran to what his strengths were.  Whenever the course became more downhill, i would catch and pass him and when it leveled he would do the same to me.  I envisioned a long day of cat and mouse.

In either case, hoping to maintain a 6:15 mile pace through this downhill, I hit the 6th mile at 37:28 or 6:14.6.  Pretty spot on.  But Emigration Canyon was over and the hills and trails began.


Almost immediately after leaving Emigration Canyon Road we made a sharp turn up a hill that was fairly steep.  I walked for about 5 seconds as I downed a PowerGel and had to drink the water to help it go down.  The hill became less of a grade of an uphill but lengthened in total distance.  Right near the top, I again took a quick 5 second walk break as I was sucking wind.  This just so happened to be the same place where I filmed a little run in the snow back in April (you thought I was going to say December!)  Soon we were given a spectacular view of the valley below. 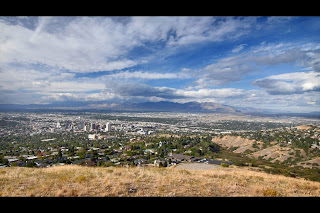 However, just as soon as it was given it was taken away and we hit a series of abrupt up and downs on trail that would test the semi-technical running skills of all runners.  In this stretch I had been passed by one young runner wearing clothing that reminded me of the Zubaz pants from the 1990s.  (Sweet lord were those awful.) we too played a little cat and mouse until, like the previous fella, he also pulled away.  I was happy with my effort so far and just wanted to keep the pace. I figured a 1:23 was probable but it depended how many more quicker risers on the trail we had to contend with.  Unfortunately for my 1:23 hopes, it was a few more.

One more short and steep hill brought me to a quick walk as did it the one runner (who had been in second originally) in front of me.  We exchanged Hellos and I kept on going.  The first woman was right behind me and I could feel her beating down my neck.  Another steep downhill had me putting a little pace between myself and my pursuers but I could tell there was not much gas left in the tank. This female and another nice runner who said that this must be "just a jog in the park for me" passed me.  He must not get how and 13.1 run really fast (relative to your ultra training) is never easy!

I knew the last few miles fairly well having run then on numerous occasions.  However, even the familiarity did not allow for me to speed up much. I was locked  into a pace, as were the other runners and some of them were increasing there's.  Not me.  Test run, Dane.  Test run.  this race was only to see where I was at in my fitness level, nothing more.

As I hit the final mile (the mile markers were off here and there, which was a little frustrating but at least we had them!) holding myself back was not going to be a problem.  I could tell I was waning and there would be no strong finishing kick.

Coming off of the road which is commonly called City Creek Canyon Road, we burst out onto the right hand side of the Utah State Capitol Building in all its grandeur. 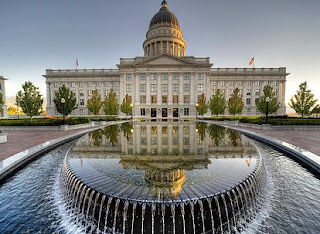 A few steps more to go and a 1:25:24 and 9th place overall finish was mine.  Not a bad morning's work.  I stayed around for a bit, signing books and meeting some really sweet people.  Then it was off to catch a plane to go ho---wait a minute! I only live like 3 miles away! Woo-hoo!


I enjoyed the race and look forward to doing more events put on by USA Endurance. I mean, any race director who actually buys a 1962 Hearse to promote his Halloween Half Marathon and then drives its rickety carcass across two states to get it back to home is a-ok in my book.

It is good to know that I was not the only one that had a hard time with the "little" hills. Just so you know I agree with the idea that racers should be involved with the production of putting together a race atleast once in thier life.

I had a hard time with this race. It was our first half-marathon and the hills were a killer...live and learn, right? What do I see in my future...more hill training for sure, speed training, a half in August and a half in October-each race improving my time. Darn if 1 race is going to get the best of me!!!! With mention of the packet delay? I too was able to bennifit from the delay. Because of it (the delay) my husband and I were able to hang out with you for awhile, get our book signed, do a little reading, and just relax. Pretty good place to be if you ask me and I'm sure the RD would have agreed. BTW-it meant a lot to both of us that you remembered our names and took the time to wish us luck the following morning. Thank you and best of wishes, David and Lisa Smith