Calories in; Calories Out

As runners we are often told “I am sure you can eat whatever you want, you run so much.”  To some extent, especially for younger runners with their high-burning engines, this is true.  Any calories into the body will not spend a second hiding abs or piling onto hips or butts.  However, this is not necessarily the case for adult runners, and it really underscores a problem of obesity in our country, even amongst runners. 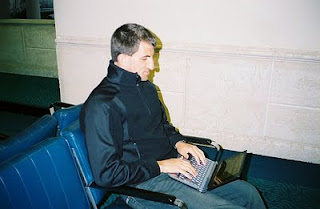 Personally, I wish I ate a little better than I do.  Part of the nature of my present existence is travel and lots of it.  For example, I have spent about 4 full weekend at home in 2011.  I am usually gone for at least three, sometimes four, days a week.  It is extremely hard to eat healthy when you are eating food on the road (or at race expos, etc.)  Throw in the cravings after a marathon or an ultra, and it becomes even more difficult to eat properly. Even when you try to at least eat decent, you may not be doing even close to the best you could.

I have been touting to many people that while running long distance is a wonderful way for many people who are overweight to lose unwanted pounds initially, it is not necessarily the best way to keep losing weight, unless you pay attention to calories in and calories out. Studies have shown that we greatly overestimate how many calories we burn in exercise and grossly underestimate how many calories we eat. 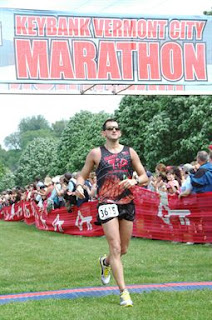 Perfect example: in my most recent marathon in Vermont, I burned approximately 3,500 calories (I am a 175 lb male who did a 3:10 - for those wishing to check my math.) Afterward, rushing to the airport, I grabbed a footlong sub at Subway. Even as I ate it I recalled a link I saw to the Worst Lunch Sandwiches in America.  Lo and behold, my standard sub was on the list.  I knew it wasn’t the healthiest choice in America, but I never thought it contained – get ready - 1160 calories, 43 g of fat and 3320mg of sodium! A little under 1/3 of all the calories I burned in a marathon were consumed by this one sandwich.  Let’s not even add the chips or drink I had, or the other three meals I consumed while flying home all day and munching.


Herein lies the greatest problem. Many would say I “earned” this reward, and I would have to agree.  But I also know I will go back to training very soon, will be home for a few days and be eating better.  So many runners, especially those beginners who wish to simply finish a marathon, will complete their task of having lost some weight during the training and then immediately slip back into rituals which caused them to be obese in the first place.  They figure that the marathon will just keep burning calories as they celebrate their victory for the next week or so.

A personal trainer once told me “Abs begin in the kitchen,” and it could not be a more true statement.  Exercise is fantastic for the body, but it is only part of the equation.  In fact, I would venture to say that what we put into our bodies means much more to our overall fitness than what we do to and with our bodies in exercise.

Should you not treat yourself to the occasional goodie?  Hell, no.  I cannot possibly be that big of a hypocrite.  Plus, life is a tough ride, so one should treat themselves to many things which make them happy. However, do so in moderation and be equipped with the facts.  Know what you are putting in there and make a concerted effort to treat your body right.

And as I have always answered when people say to me “You can eat whatever you want”. Perhaps, but would you put crappy gasoline in a Ferrari?
Posted by Dane at 2:56 PM

Loved this article Dane and it serves as a great reminder; especially liked the quote "Abs start in the kitchen". Of course I read this while munching on a great chocolate chip cookie. :O

So true, Dane. I used to reward myself for my six block walk to work (from my wife's parking space at the Treasury Dept. to my office at 16th and K in DC) with a cinnamon raisin biscuit (with frosting) at BK. Sometimes that was dessert after a bacon, egg and cheese biscuit. Lo and behold I gained about 7 lbs per year in my 20s. That was a tough 70 lbs to lose in my 30s and even tougher to keep off in my 40s. I learned the calories in, calories out lesson the hard way. That's why I treat myself to a nice steak after a big event. I can get the protein my body needs for relatively few calories. More important, I get the satisfaction of a great meal while refueling my body for the next workout.

Great post, Dane! I can totally relate. Even last week, in the midst of my peak Ironman training, I realized that I was gaining weight (seriously?!?). And so I started writing down what I eat, and it put things into perspective for me - I was eating junk! So now, rather than going for the easy food (Cheez-its as a snack and lunch from one of the many establishments near my office), I've made a switch to string cheese, fruit, and healthy homemade turkey sandwiches. I feel better, I run better, and have lost about five pounds in one week. I've still been able to treat myself here and there, so I don't feel deprived. Amazing what a difference eating right can do!