The Akron Marathon was where in 2008 I had the pleasure to share the dais with Kathrine Switzer and begin a friendship that flatters me to this day.  I say flatters because when of the most iconic figures in women’s running deems to cal you a friend, there is no better adjective to describe what you feel.  So, when the Ohio Beef Council expressed interest in working with me at this race, even though it was one week before a new marathon PR attempt, I said yes.  I figured that it if I didn’t get the new PR it probably had a great deal more with the 80,000 miles I have flown this year and the other 30-odd races in between.
I found a long time ago that most people find questions in and of themselves to be confrontational. Regardless of the inquisitive nature of the interrogatories, it is the mere fact you are not accepted at face value the words as truth which bothers many. Myself, I love questions. I love explanations.  In fact, if I am not asking you questions about what you have said, chances are pretty good I don’t care what you are saying. 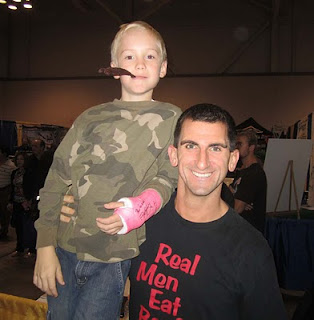 Putting myself out there in the public eye, especially as the first National SpokesRunner for the Beef Industry has allowed many to question me. I welcome it.  If I don’t know the answer to your question, I have no problem telling you so. I like learning as much as I like knowing the answer already.  And one major thing I have learned is how many people in this country are running races, are fit as a fiddle and are fueling themselves with beef.  I also know that some people have questions about whether beef is healthy for them. If you have those questions, do what I did: research.  Both the book kind and the experiment on yourself kind.
When I asked one runner at my booth if he liked beef, he patted a rotund belly and said: “Don’t I look like it?” I don’t think he expected my response.  “Nope.  It looks like you enjoy eating lots of crap.” This led to a great exchange wherein I learned that he did indeed pair his beef choices with not-so-healthy other choices.  When another woman told me that she liked beef but it wasn’t a healthful food choice, I inquired what she was basing this decision on. As I interrupted her throw away sentence here (I wanted to stop her before she went further) she rolled her eyes and stated: “Science.”. I’m not a fan of having someone roll their eyes at me when I am asking a simple question and usually I will just ignore them.  But I pushed forward.

“What kind of ‘science’?”  She really didn’t have an answer for that. She repeated her one word answer.  What seemed obvious to me was that she was simply parroting something that she thought was true.  She was going off of some ill-conceived notion of what beef does too people without really knowing the cause and effect.  Just like the guy with the gut.
The same thing applies to running. It’s bad for your knees.  You will get arthritis.  Eventually an injury is going to befall you. All runners hear these things from non-runners but I am actually subjected to them by other actual runners. At a race expo.   I am always dumbfounded that here are people who are actually doing the activity and they are still listening to people who haven’t run since they were forced to in 7th grade for the Presidential Physical Fitness test.  I want to grab them, shake them and tell them “Think for yourself, damn it!”
Whether it is a food choice, a shoe decision, or listening to some crackpot espouse some theory that you know could not even be close to the truth, think for yourself.

Race Morning
There was little to no pressure for me on this race.  Even though I had asked Facebook friends to choose the time I would run for this race (the verdict was 1:33:00-1:33:29) if I didn’t hit it, there was nothing on the line.  It was a catered training run with spectators and a big banner. I decided to bring my FlipCam and make a little movie.
After parking surprisingly close to the race start and having way too much time on my hands, which I spent talking to a slew of runners who I had met the previous day, I was ready to get the day underway.


First 3 miles: 6:45, 6:47, 7:24
In the starting corral I was positioned next to a runner I had met three years prior at this race when I was pacing the 3:10 group. Brian Polen was his name and while he had not been able to stay with me that day, he has made enormous strides since then.  In fact, the previous week he had run a 50k and was here to full the marathon.  It was running with him for the first two miles that put me way ahead of my desired pace for the day. I was unsure of what Brian was shooting for but my pace was supposed to be 7:05 per mile and we were far ahead of that.  So I had to bid him adieu and almost immediately he was gone from sight.  I later learned Brian ran his first sub-3 hour marathon ever. Given the relative difficulty of this course, and the fact that he had run a 31 mile race the week before, I was really taken aback. Kudos to Brian indeed.
Next 3 miles: 6:45, 7:41, 7:06
After another mile a little bit too fast, even with a hill (virtually the only one to deal with until the very end for us Pikermians) I decided to heed the call of nature and hit the loo.  When I popped out, talking to my camera, one guy said “I don’t even want to know what you were filming.” Up ahead I saw a pace group running together and thought for about half of a mile that it was the 3:10 pace group.  If it was, they were WAY ahead of schedule.  I inquired and the guy told me they were actually the 3:05 group.  That equates to a 1:32:30 for the half so them being a smidgen in front of me put me exactly where I needed to be.
To mile 10: 7:14, 7:08, 6:49, 6:59
I was having fun with this race.  Running over to pet dogs, coming to a standstill and talking to spectators like we were all watching the same race and replying to funny marathon signs with my own retorts. Someone told me I looked like I was just out here having fun.  When I replied I was, she jokingly told me to stop it because she was working too damn hard and it made her feel bad.
I began running with a few guys and we all introduced ourselves.  Dave and Tom were both feeling good, both on pace for huge PRs and both had me excited.  For the next two miles I fell into their groove and didn’t even realized I had run 30 seconds faster than I hoped to.  We all knew there was a big hill coming up around mile 12 and I think we were getting mentally prepared for it by continuing to edge up a little more here and there. I told them they just had to stay the course and their PRs would be in the bag. 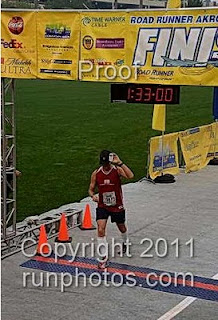 On the finally downhill section between mile 10 and 11, I realized I had run another 15 seconds faster than I wanted to and hitting a 1:33 was going to be hard unless I slowed.  But the only thing harder than running faster in a race is running slower when you have energy to speed up.  Try as I might, even so much as falling back and no longer talking with the nice guys I was running with, I could not slow down too much.  I finally resorted to twice more stopping and talking with spectators, if only for a second or two, hoping to eat up more time.  This might be the first time I have ever thought the clock was moving too slowly.
As I entered the Akron Aeros baseball, stadium, and finish line for the race, I saw the RD for the race standing at the end of the finish line shaking everyone’s hand. Sauntering down this chute, recording others with my camera, I also noticed a quizzical look on his face.  Once I stepped on the timing mat at exactly 1:33:00 I think he realized what I was doing.  Ironically, however, my chip time put me at 1:32:58 making me two seconds fast on my goal. Whoops.  However, in an ironic twist of fate, by making sure I got the 1:33:00 I actually allowed the husband of a woman I met the previous day beat me.  She had purchased my book for him, even though I had never met him thinking he would enjoy reading it. Well, if that wasn’t odd enough, his name was also Dane, marking potentially the first time two Danes ever finished in consecutive order in a race (outside of Denmark, that is.)

Now on to that marathon personal best attempt in St. George.
Posted by Dane at 3:23 PM

Dane, this is Frank. I should have took a picture with you at the expo. Good race you ran and good luck this weekend.

My race recap will comes online sometime this weekend.