I first met Michael Wardian when I was a fledgling marathoner in Washington, DC.  By then, Mike had already begun to lay the groundwork for what would soon become a stellar running career that seems to still be far from its crest. We have run together on numerous occasions if by “together” you accept the definition of “on the same course”. But I don’t feel too bad about being spanked by Wardian as few can keep up with him. He won the 2008, 2009, 2010, 2011 US 50 km championships.

He has also finished the highest of any American in history in the grueling Marathon des Sables, a 250 kilometer stage race in the Sahara desert and just recently qualified for the Olympic Trials in the marathon yet again with a 2:17 at Grandma’s Marathon. He is one of a select handful of runners who are helping to bring running, and more specifically, ultrarunning, to the masses. A quick google search will show you what he has been able to achieve in just a few short years.

I had the chance to sit down with my former running club mate and ask him a few questions.

Dane: As you have undoubtedly been told to race less frequently and  focus on one race to attempt to run faster, does your huge Personal Record Grandma's Marathon this past June while continuing to do things your way, vindicate your desires?
MRW: I don't feel vindicated, just happy and really excited.  I feel like I am running and training the way that works for me and until I no longer get the results that I want and expect I will keep doing things as I have but to see results and tangible substantial gains is really inspiring and just pushes me to work that much harder.

Dane: How did you figure out that you were able to be such a prolific running machine?
MRW:  I don't really consider myself a running machine.  I just like to train, run and race. That means in order to do all the things I hope to accomplish I have to bounce back fast.  I think that my desire to be out there and exploring my limits really helps me achieve the goals I set out for myself.

Dane: Your humble attitude is why so many people enjoy being around you, but whether you consider yourself a running machine or not, you are doing something, few if any could ever do. Without a doubt you are working very hard to do what you do but were there any signs of this talent (e.g., family members who are fantastic runners) prior to embarking on your own journey?
MRW: Thank you again for the kind words, I guess I should have known I had some talent as I always be one of the first guys done with our runs for lacrosse (At Michigan State)  but never thought I would run a marathon or ultra marathon. Then I went to my buddy, Vince Voisin's house and his Mom, Vicki showed me some pictures of her doing the Boston Marathon. I had always been into "Wide World of Sports" and that stuff but never thought I would do those things until that day.  I decided that I wanted to run the Boston Marathon and Vicki gave me a packet to set me on my way. I then trained for and ran the Marine Corps Marathon and was able to qualify in about 3:08 or so.  After, qualifying I went to Boston and I was hooked and decided to see just how good I could get. I guess I am still trying to see just how fast, strong and far I can go.


Dane: You mentioned you played lacrosse in college. Where you also a runner there as well?
MRW: I am proud to say, I was a Michigan State University Spartan and I played Division I lacrosse for them (when they had a Men's Team. They now have a club team which is pretty darn good.) but I did not do much running, other than the obligatory training runs.  I actually used to make jokes about of the skinny runners so it is pretty funny where I am  now.  I wish I could have run back then and seen where that would have taken me but I am also happy that I got into running later in life as I am having so much fun exploring it presently. I have learned a lot of what I know organically from myself and by following my path and not coaches or their ideas about how it should be done.

Dane: You balance a full life with a job, two kids and a wife. not everyone obviously has the genetics, drive to succeed and good luck that you have had with your running but what do you tell people who feel they cannot fit exercise into their lives?
MRW: Thanks for saying that I am balancing all my responsibilities but I couldn't do it with the support of my wife, Jennifer (she is amazingly supportive and just cool), our sons, Pierce (5 years) and Grant (2 years) and then my family, work (Thank you Keith & Mariele) and sponsors (MarathonGuide.com, The North Face, PowerBar, Succeed, Gold's Gym).

Dane:  Obviously you have great support from sponsors, family and your job, but it must get tiring to hear many others say that they can't take on certain challenges because of this or that when you are doing everything they are and more?
MRW: I think I very lucky to have such incredible support and I can't say it enough but it is not possible without everyone backing me and I think people can do a lot more than they think they can and I hope I can show people that a "regular guy" can do some pretty incredible things. 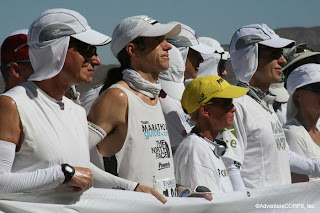 MRW: I am a Octo-Lacto-Vegetarian, but that is because it works for me and I don't think everyone needs to be a vegetarian. I just think that people should try and find what makes they feel good and fuels them.  I eat a lot of different things which includes a lot of fresh fruit and carbohydrates – but that is what works for me.

Dane. Often the greatest performance on the outside in a race (overall win, course record, etc.) is not the one the runner considers their best.  Do you have one or two races which you think really define your career or that you are most proud of?
MRW: I think some of my best races have been this year and I would say that being able to finish the Badwater Ultra Marathon this year in 3rd place on my first attempt was pretty incredible. Just a few days ago I ran the "Ultra Race of Champions (UROC) 100K" and while I lost the race in the last few miles but it was probably one of my best runs ever. I was very strong on climbs and trails and just running really super smoothly. It was great to see a lot of hard work pay off.

Dane: Tell me more about the Indoor Marathon you created.
MRW: With the help of MarathonGuide.com , Jay Wind and my wife, Jennifer, we put together the "Grant/Pierce Indoor Marathon" named after my two boys.  This was our second year of putting on the race.  The first year I was doing it to set a World Record for the fastest indoor marathon, which I did in 2:27:21 or so.  This past year, I was much slower, like 3:15 as it was only four days after the Badwater Ultra Marathon . 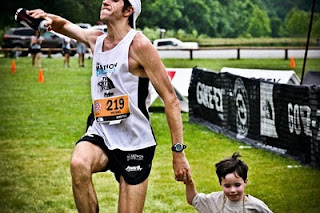 Dane  What are some of your next races which you have your sights set on?  Big goals?
MRW: I have a big fall of races, including the Tussey Mountainback 50 Miler, New York City Marathon and The North Face Endurance Challenge-50 Miler.  In January I will be taking part in the 2012 USA Men's Olympic Trials in Houston.
My big goals are simply to improve.  Every time I race or run, I am trying to do better than I have done before and sometimes that is possible and sometimes it is not.  Always to do better and go father, faster and stronger.

Dane: Do you ever desire to make running your full-time occupation?
MRW: I don't really desire to make running my full-time occupation, I love being an International Ship Broker and all the terrific people I work with and I would miss coming to the office and being a part of the Shipping community.  That being said I also love being a world class athlete and getting to explore my limits.

I am also looking forward to taking part in the Kinhaven 5k on November 20 which benefits the Kinhaven school, a parent-run co-operative pre-school, in operation since 1971,which is a non-discriminatory, non-profit educational organization licensed by Arlington County and the Commonwealth of Virginia.


I personally look forward to seeing Mike at the Hartford Marathon next weekend where he will undoubtedly stomp me by 30 minutes or so but will always be waiting around to cheer other runners on as they finish.
Posted by Dane at 10:24 AM

Thanks Dane. That was a cool interview, encouraging us ordinary people

Nice interview Dane. It's great to hear about Michael and all his success. Can't wait to see him on the trails at TNF 50 in December. For a 1st timer like me, I'll be in awe watching him fly by miles ahead and knowing that while he's an elite runner, he's still just a regular dude.