Difference between a Runner and a Jogger

As the total number of marathon finishers increases, and the average marathon finishing times get slower and slower, the debate about how slower marathoners are ruining what it means to be a “marathoner” has raged on. To some extent, I understand the viewpoint of those who state that those in the 5 hour range or slower are “dirtying” what it means to be a true marathoner, even if I do not fully agree with it.  For example, if you say you play baseball and are a baseball player, the understanding is usually that you play in the big leagues and are, at the very least, one of a select few hundreds of people in America that are good enough to play that position.  If not, and you just play beer league softball, well, then someone knows what that means too. 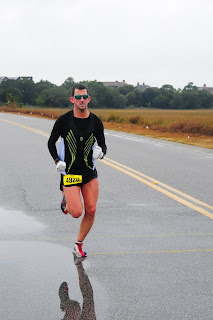 However, if one were to scoff at the 5 hour marathon finisher the same way we would the guy with the gut and 40 ounce aluminum bat swinging for the fences, they would risk being ostracized for their unenlightened opinions about what it takes to be a true marathoner.  I mean, I truly do get it.  For people who define themselves by a time and a distance, not necessarily everyone should be allowed to call themselves a marathoner. But then we get to the obvious question: where is the line we draw?  4 hours?  3:30?  Maybe sub-3?  Heck, soon we may have a world record under 2 hours.  Can people only 2:30 and under be real marathoners?  They would still be over a minute per mile off the world record.  Isn’t that slow and therefore demeaning what the other real marathoners are doing? Obviously, there is not a time goal that fits all criteria for this line of thinking.  As such, there has to be a better way to decide what makes a real marathoner, or real runners for that manner.

A few years back, I was at the Boilermaker 15k in Utica NY.  I had the chance to partake in a great conversation with Kevin Hanson of the Hansons-Brooks Distance project.  This creation of Kevin and his brother Keith is an Olympic development squad that most recently put Desiree Davila finish second in the Boston Marathon. Obviously Kevin, who surrounds himself with only the speediest of the speedy, must be disgusted by the plodders out there sullying this wonderful sport, right?  Not even close. 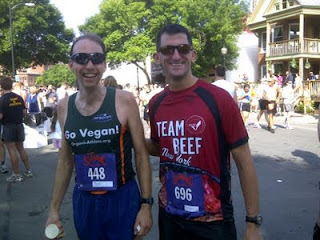 Kevin and I came upon just about the same conclusion and feel that we were able to easily define what the difference is between a runner and a jogger.  In our opinion, this difference is having a goal.  Not obtaining a goal, not having a fast goal, but plain and simply having a goal. If you are going out to run for a reason and a purpose, with a goal in mind (whether it be to get fit, to get faster, to improve your mental health, etc.) you are, without a doubt, a runner.  Sure, hopefully it is a realistic goal or one that is not somewhere on along the lines of “I want to decrease my marathon time by one second” but a goal nonetheless.

Everything else falls into too much of a gray category.  What is fast? What is slow? In the end it matters not.  It only truly makes a difference if there is reason why you are putting on your shoes.

Then, regardless of your time, you have just as much in common with the elites as anyone else.
Posted by Dane at 3:19 PM

Thanks. As I have aged from late 20s to 64, I have definitely changed my own opinions. Now even the five years difference in an age group makes a big difference in results. Maybe you should add that the goal should be one that causes a little pain. There is much more reward in achieving a difficult goal.

I was very worried about how this entry would end and what your viewpoint was going to be. In the end, I enjoyed your viewpoint. As a slow runner, I appreciate being considered a runner nonetheless, by those faster than I.

Well put Dane, that's a great distinction. I always set a goal for each race I run.

When we see a "slow" runner finishing a marathon in 5 hours, or we see someone terribly out of shape plodding along on the side of the road, we should look at them with respect and wonder.

Anyone in 21st century America that gets up off the couch and does something physical deserves encouragement and celebration. Isn't this the point of all the lofty proclamations about fitness?

Bravo slow runners! you're DOING IT. That's enough for me.

All of us have a goal as a runner. That is to place one foot in front of the other and try to be better than we were yesterday, or maybe last week. For some of us it is racing, running, or jogging, but all of it connects us to the outdoors and great people which is always good.

I too like Amy, was a little worried where this article was going to end. Although I'm not a runner, but a wheelchair racer, there are much faster wheelers than me. I have tried everything from training harder to getting better equipment. But no matter what I try, I'm slow. In Pocatello this weekend when other wheelers were flying down the hill at 30 to 40 mph, I was nervous when I got higher than 17mph going around the S turns, I guess I do not have the need for speed. I have always been the cheerleader for the under dog. I applaud those runner/joggers that cross the finishline long after the faster runners have already showered and are relaxing. God speed to the fast racers - be they runners or wheelers and to the rest of us Keep your eyes and hearts on your goal of just crossing the finishline. No Goals no Glory, even if that Glory is to celebrate crossing the finishline.

As a younger runner I was always at the front end of a race and I know how it feels to be the fastest. Now that I'm older, and am too wimpy to make myself hurt that badly to win, I've experienced the back end of a few races. Let me tell you, looking around the back of the pack it's easy to see that those racers are working extremely hard, pushing, and are forced to hurt for longer. While their finish times might not be impressive to some, the amount of effort put into each race is definitely worthy of everyone's respect.

Thank you for this post. I always use air quotes when I say I am a runner because I am slow. Real slow. But I'm going to stop doing that. And hold my head a little higher when I come in last at my next 5K.

Thank you for coming down on this side of the 'debate' Dane! I am not now, nor will I ever be, "fast". But I DO have goals for my running, not the least of which is consistency and to be doing it 40+ years from now. And, after December 7th, I too will consider myself A Marathoner. Not the fastest, but definitely one of the most sincere!
Thanks again!

I like you! 😉 You are absolutely right.If someone is putting forth an effort it should be applauded. Doesn't matter how slow you go..I say keep moving. Speed is the last thing I think about when I run. I base my runs on how I feel. If I feel good then its a good run! Happy running my friend!

I happened to pick up a copy of the late George Sheehan's "Running to Win" recently. Sheehan distinguishes between a jogger, a racer and a runner. To Sheehan, the jogger seeks to remedy the physical effects of a sedentary life; fitness. The racer is interested in psychologigal aspects; alleviating obredom, competitiveness, etc. The runner seeks to remedy spiritual aspects. To Sheehan, running was a voyage of self-discovery. Then time doesn't matter.

I started running (well, jogging) at the loss of a self-bet. As a result, I found out how bad shape I was in, but moreso how much I liked getting out there. I ran for a couple or three months in high school, but that was it.

I am, however, one of those people who are talked about badly. I was 3rd to last in a 10K on Labor Day this year, and I see power walkers who pass me in my walking phase.

To me it is a perspective. Whether you compete, run, jog, walk, or push in a wheelchair the goal is to cross that line. I've crossed the line of countless 5K's, many 10K's, a few 15K's, and a dozen Half Marathons. My current goal? I want to cross a marathon finish line.

It is a debate that I find bewildering, for myself I classify a runner as one who uses a running gait and why would another runner feel the need to judge a slower runners' speed? Unless you are the world record holder then you are slower than someone else and as you age you will eventually become a slower version of yourself. Jogging? I would define that as running comfortably so one person's jog is another persons race pace. I was a runner training to break 2:50 for the marathon when my co-ordination began to die and I was diagnosed with early onset Parkinson's disease, I ran for a few years but gradually my run became an uncomfortable jerky action that was not rewarding so I took up walking because despite 12.5 years of PD I walk well with my walking stick. Am I a runner? No. Do I have goals? Definitely! I've walked a 5.42 mara but I prefer ultras these days: 24 hrs 133.5 k (83 miles) and 219.5 km (137 miles) for 48 hrs.My new goal is 240 km in 48 hours. Forget about what everyone else is doing, run because you can and dream big and challenge yourself no matter what your speed.