It is amazing what a week does.  Right after the Mesa Falls Marathon at the end of August I felt I needed to completely re-evaluate my PR attempt at St. George on October 1st.  My foot was killing me, I felt like a completely lethargic out of shape runner at Mesa Falls and nothing looked good.  By the middle of the week, workouts felt great, the foot felt infinitely better (but still hurts) and I was ready to go and attempt that PR at St. George.

First things first, however, was this training run at the gorgeous Oregon Wine Country Half Marathon. I have sung the praises often of the races put on by Destination Races and this one is no different.  In fact, while I have not done all of their races, of the three I have, I would say this is my favorite, even if it is the one i think is the most difficult.

Because I rarely repeat races, I do not often have the chance to reflect on a previous race.  As I ran this race last year during Labor Day weekend, I was fortunate enough to have that opportunity here. I tried to utilize that knowledge the best way possible. 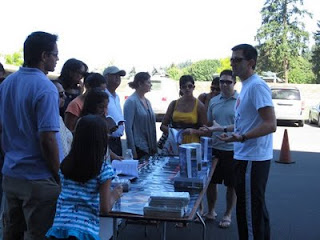 First and foremost, however, I was at the race to work with the Oregon Beef Council to continue to talk about how healthful a choice eating lean beef is for runners, triathletes and everyone.  I make no secret that I love beef and feel it is definitely one of the reasons I am able to perform at the level I do. To be able to spread that word to so many, and hear so many tell me how much they already agree with me, is awesome on a weekly basis.

Last year the weather had been just about perfect for running, with cool temperatures and mostly cloudy skies.  For this race,  even though temperatures promised to be much warmer later, we had a nice brisk morning to wake up to and low humidity.  As I stood in the bathroom line, talking with Will Wise of the Oregon Beef Council who was attempting his first half marathon ever, we quietly watched the sun slip over the mountains in the east and ever so slowly raise its orange head into our morning.  I have seen very few sunrises in my life, at least from this end of the day, but this one was pretty fantastic.

I was ready to run.

I did not originally list them in that order but when it comes to importance, that was how they should have been listed. By running smart I meant to simply watch to see how my foot felt and monitor any potential problems.  Having fun - well, I do that in most races. I'll give you an example in a bit.  As for beating my course PR, I hoped it would happen but I knew this was a different year, a different set of circumstances, and I didn't care too much about doing that really.  I just hoped it would happen.

The first three miles fell right where I needed them.  I crested the first hill of a rather hilly course and felt solid.  I could tell the field was much stronger than it was last year when my 1:24 netted me a 15th place overall.  But I was racing only myself today and did not care how many people finished in front or behind me.

The longest hill of the course happened right before mile 6, which was also the relay exchange point. I was more than pleased with how little time I lost on this section, or any of the other previous hills as that graph above does not lie. I felt going under 1:24:40 would not be too much of a problem.

At the relay exchange I asked those assembled if it was too late to change my mind and if anyone wanted to hand-off.  There was laughter but no one accepted my cop-out. Guess I have to keep running. 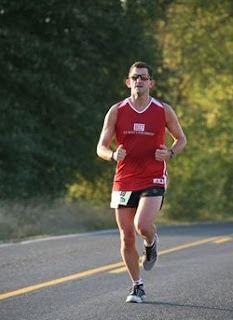 After the initial jostling for places in the first quarter of mile or so, I had fallen into a very common position for me: not fast enough to be in the top 5 or so but faster than the majority of even the relatively fast guys.  I do not know if I like this because it happens to me all the time or if because it happens to me all the time I have grown to like it.  Either way, I enjoy being alone with my thoughts when I run.  I looked left and right and took in the scenery. While not as abundant in its vineyard viewing as the other Destination Races, the vineyards and hillsides viewable from this closed to traffic course were just beautiful.


After the exchange zone, I could hear a couple of pairs of feet coming up behind me. I assumed as I was not slowing that they must be relayers who were tearing off after their hand-off.  However, one of the first runners who passed me made me realize that was not the case.  "I have been following you for four miles now and I am just watching you look all around you like you are out for a jog.  Do you know how maddening that is?"  I laughed and said "Look at this place.  Can you blame me for just loving the views?"  He agreed and soon left me in his dust.  As we were entering the dirt road section of the curse, I do mean "dust" literally. 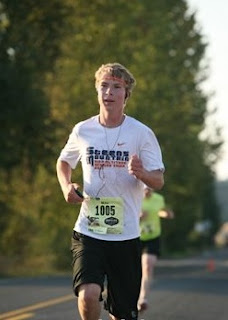 For whatever reason, even though I had ran the race, participated in the course description with the RD at the expo held in the shadow of the Spruce goose at the Evergreen Air and Space Museum and had read all about the race on the website, I forgot how long this dirt road section was.  Thinking it was a bit over 2, it was actually every bit of 3.75 miles.  Far and away the toughest portion of the course, I had at least remembered not to wear racing flats this year and instead when with my K-Swiss Kwicky Blade Light shoes.  I could handle the rougher portions even better and felt good.

The first two miles of the dirt road felt great even when I got passed by a young runner I had spoken to the previous day about how young is too young to run a marathon.  I thought me might have also been running the relay given his mother had expressed some desire in keeping him from running long runs, but as it turns out, young Mike Wittenburg, was running the half and just crushed an awesome time. Way to go Mike! 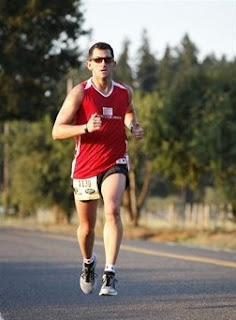 Unfortunately for me, while I had been riding right on the cusp of setting a new course PR, the 10th mile hill, dirt road and whatever else made me spit our an exceedingly slow 7:22 mile which more or less killed ay chance of breaking my course PR.  My only hope was that the mile marker was as little misplaced and my 11th mile would be in the 5s, evening things out a bit.

That 11th mile did not even things out, even with me pushing hard and closing in on a few runners.  I made the executive decision that the last two miles would be about completely enjoying the day, pulled up the horses and cruised on in.  I was looking around even more, thanking the volunteers and police officers and appreciating the few spectators who came out early in their Labor Day weekend Sunday morning to cheer us runners on. 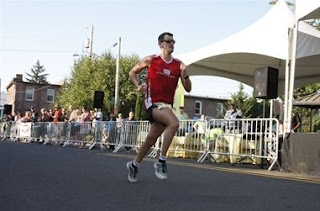 Heading down the final stretch, I picked up the pace a little to try and look fast.  Whit Raymond, announcer extraordinaire gave me a nice warm welcome as I sprinted into the finish. As I plan on doing more and more triathlons I have a feeling I will hear more and more of Whit's voice. I was able to slide in under the 1:26 mark with a 1:25:54 good enough for 26th place.

The overall field was so much stronger on this day that if I had run 1:24:39 I still would have been 24th.  Last year's overall female winner, shaved four minutes off of her time (mostly because she was no longer just 5 months past giving birth) to win in 1:18.  Good friend and fellow SLC Track Club member, Neal Gassman, won the Master's title, hitting a 1:17 at age 44.  I would like to say I hope I can run a 1:17 at age 44 but as I haven't come within two minutes of it at age 35, I think i need to get closer first!  Way to go, Neal! 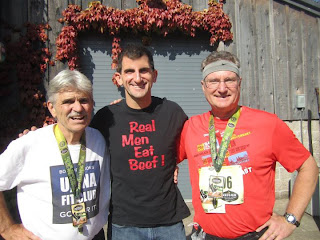 After the race I spent a great deal of time talking with Bob Anderson, the founder of Runner's World and he too is a huge supporter of the beef industry having eschewed a more vegetarian lifestyle when he found it did not help him fuel properly.  Eating more lean beef he went and ran a 1:25 half marathon at the age of 61!  Bob and I also talked a great deal about an upcoming project I have in Oregon.  Stay tuned for LOTS of details about that as they flesh out.

In the meantime, hit up Destination Races somewhere in this great country, grab one of the 29 cuts of lean beef and refuse to let summer go without a fight by throwing it on the grill and know you are fueling your body right!

Go Beef! Enjoyed meeting you and buying your book. Taking it to Las Vegas for the plane ride. Namaste'