As fall approaches, I have received a lot of requests and/or questions about whether I was going to run the Drake Well Marathon again. for those of you who may not know (and don't wantto click on the link to right above the word "link") the Drake Well Marathon was a marathon I organized when I realized there was no planned marathon in 2006 for the second to last weekend of the year.


It was a rousing success. I actually capped the registrants to 25 given that I did not feel a track (or the race crew of me my mom and my aunt) could handle more people. Well, both the track and my relatives showed me that I underestimated them. The track easily could have handled 50 runners circling the track (given the fact we had chip timing) and with one or two more volunteers, the race could easily have handled the increase in races.


Believe me, it was with a heavy heart that I turned people away as each runner's registration fee was a direct donation to my charity. (Well, I didn't have any problem turning away THIS guy:


" I'm curious, why would this race be listed on the marathon guide, which runners view to find races to particpate in, hello!!, and its a closed race that no one can particpate in??? My wife is a hard core runner and this race is an hr. from us..I'd be willing to pay for her gatorade and give her a small banana before she left that morning..."


Thank you for your message below. To begin, your statement that the marathon is a closed race is incorrect. Rather it is a race (like many) which has reached its capacity. I am happy to hear you are interested in the Drake Well Marathon but given the logistics of the race (105 laps around the track for one) having more than the prescribed runners would tax the limits of the track.

It was listed on marathonguide.com (and many other places) to attract runners. Given the $100 registration fee (a pure donation to the charity I am running 52 marathons this year for), the date of the race and difficulty of running so many laps I never would have assumed I would have filled all the slots. Luckily for my charity I did. When I listed it in October it was open. It is now closed. The Marine Corps Marathon doesn't take down its website or listing when it reaches its capacity. I do not think you are suggesting I should do the same with mine.

I hope to organize a much more "normal" race with many more participants in Titusville next Fall but presently working a regular 60 hour a week job in DC, fundraising and running a marathon every weekend has made it difficult enough as it is to organize this race."

But I digress. Will I be holding this race again this year? There is a 99% chance I will not. One main factor is necessity. I had to have a marathon last year and had to have it that weekend. I knew we were tempting the weather fates (Titusville receives an average of two feet of snow in December alone; fyi, I think it is hilarious that the link i just provided says "Pennsylvania receives little snow between May through September") but I had no other choice. This year, the necessity is not there and I feel that given Titusville has had only something like 2 non-white Christmases (Christmasi?) in the past 25 years, it is not worth the risk.

That said, I would LOVE to have another marathon in Titusville. Even more so, if I am going to go to the trouble of organizing one, I want to make it a REALLY nice one. So, I have proposed an idea to my high school track coach who was integral in seting up the Drake Well Marathon.


Below is a picture of the possible course. 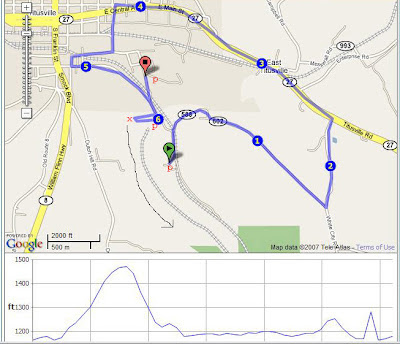 P= parking.
x= Where the course would join the 9.7 mile bike trail (out and back equals 19.4) which only has ~100 total feet of decline on the way out and the same on the way back. Adding the 6.3 I already have mapped means I would only have to find an extra .5 somewhere. Not hard. Maybe a lap around the track (especially since that is where I planned on having it finish and the map I have doesn't really count for that per se.)

Sure, there is a hell of a hill to begin with and another killer to join the bike bath but I think it would be a good idea. I think it could easily handle 2-300 runners. Aid stations on the bike path could double up (given the out and back nature) and I would be surprised if Titusville and Drake Well wouldn't be behind it for the tourism factor alone.


The vast majority of the bike path is shaded and is a soft asphalt surface. (Click on links for pictures. Pic 1 and Pic 2). Some ideas would be to have your bib number get you into the Drake Well Museum for free. Titusville also has Cabooses that have been turned into motels that are open during the summer/fall (a late summer start would be perfect forthis race. Even if hot, the shade of the bike trail would keep the heat away) and there is a local pool for the kiddies.


These are all just a few of my thoughts but hopefully I can make this a reality for 2008.


If you have any questions, please ask away!
Posted by Dane at 8:16 AM

Well, Dane, since I own property not too far away in NY state, I would be in if the timing fits. See you there.

Dane, I've actually been kicking arounf the idea of putting on a trail race there. If we could get permission from the Oil Creek SP. The way the trails are setup you could have multiple options. with aid stations that would be used for the various options. If you think this would be a good idea, let me know, I'll work with you!

Hey Sutley! I am going to stick with just the marathon idea right now (Runing on the bike trail will have less of an "economic footprint" and therefore easier to convince them to let us use it) but would love your help on that!

Glad to hear you may do this. I am in the minority of people who thought the original course rocked, but I'd be in for this course too, especially in late summer.