1. I am still feeling the lingering effects of last week's sickness. As such, while I was going to do two long runs this weekend, Saturday broke and I just decided to do 5 miles before I began a day of laziness on the river with some friends.

On Sunday, I decided I would eke out 12 miles and just call it a day. One of the newer members of our running club, Kate was going in the direction I wanted to run and had mentioned she was doing 12. I asked if she minded if I joined her to which she sure.


Up the Capitol Crescent Trail we trotted and shared stories as runners often do. She said she ran in high school but it has been a while since she raced. I asked her when was the last time and she mentioned the 10k in Leesburg was the first time in 3 years she had actually been in race. Wow! That is about the time I started my 3rd marathon. I have run 66 since then. I completely admire those who enjoy running just for that sake and don't feel the urge to race.

Then she mentioned this run we were going on was the longest she had done. Ever. Double wow! I love this sort of thing. I felt really cool to be going on the longest run someone has ever done. You rarely get that opportunity. So, we chugged on at a nice clip and before we knew it we were done.

2. In spite of my sluggishness, while waiting for someone to call later in the evening on Saturday I decided to kill the time with another run. Limited in time I cranked out a 5 miler in 35:02 and was able to meet the person in time.

3. The meeting was to re-measure and then set up the Arlington Downhill Mile. Well, first things first:

a. This race will be taking place on Tuesday August 28th at 7 pm at the start of the Donaldson Run Trail of of 26th Street North in Arlington (across from Marymount University). See the picture below for map details. 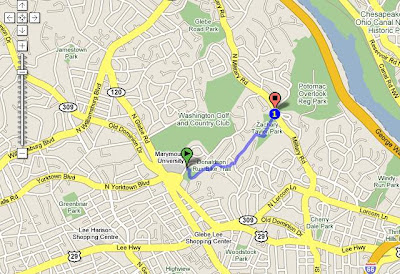 The race will cost $1 for members of the Arlington Cooperation Foundation, $5 for non-members (join for $10 and get an automatic $10 off future long distance running events sponsored by the ACF).

The trail still drops well over 230 feet in a mile and has a few twists and turns. But you are more or less guaranteed to run the fastest mile you have ever run.

The race is limited to 25-30 runners (tentative and could be changed). I hope everyone will be interested in running this race and contributing to the ACF! Should be a blast.

Sounds like a successful weekend, aside from feeling icky.

I can't believe the course was short. My career is over - I had already contacted the USATF to tell them about my time - and now everyone will know I am a liar. :)

Oh well, nothing left to do but lace up the ol' shoes and tumble down the hill once again! AWESOME!

By the way, I ran in 2 different 1 mile races this weekend. And oh how the mighty have fallen...on the track Saturday in 5:14, and on a rolling hills trail on Sunday in 5:36. Why can't every race be downhill??

Rest up, stay healthy because you and I are going to be battling for REAL sub-4 minute miles!

Hey Dane,
ONE WORD....AMAZING!! You will be missed...in the Quad Cites this year!!