Changes to the Marine Corps Marathon

In case you had not heard, the Marine Corps Marathon has changed its course a bit.

In the most recent past, I have mentioned that the MCM is one of my favorite, if not the favorite marathon I have run. The atmosphere, the crowds and the fact that the race not only honors our Marine Corps but has not taken on a title sponsor (*cough* NYC *cough*) are three things that make me love it more than most any other large marathons.

While not as important, but definitely up there in my consideration of why I liked MCM, was the fact that in 2005 and 2006 the course remain unchanged after changes every year for multiple years before that. While the changes from 2003 to 2004 (wherein the race, for the first time started off by NOT going towards the Pentagon and instead snaked through the Rosslyn neighborhood of Arlington) added a tough hill it also added a nice long downhill before its jaunt through Georgetown. My point is, constant tinkering with a race adds to uncertainty amongst runners, even those who have run it numerous times.

Do not get me wrong, I understand that due to construction on the Rock Creek Parkway, course adjustments were necessary. Heck, while I will feel like I am going to work during the race (the proposed changes chart 2 miles of my daily commute) in spite of the short (but steep) hill from Foxhall Road to MacArthur Boulevard this portion may be quicker than the RockCreek Parkway section. But the Rock Creek parkway section is one of my favorite parts of this race. Why? Because for the better part of 2 plus miles, those of us running in the 3 hour or under category get to see something we usually don't see in marathons: the rest of the pack!

Usually, by the time you descend the RCP section you are a good 10k into this race. Semi-elite runners have separated themselves from the pretty good runners who have separated themselves from the "local class" chaps like myself, who are ahead of the majority of the pack. But, when you turn down the hill of RCP, you get an eyeful of 20,000 runners coming the opposite direction going up the hill that you just came down. I love this. Scores and scores of people in all kinds of colorful shirts and costumes and the like are chasing after that elusive turn around point. And when you see someone you know, they can always gauge how much faster of a runner you are then they are and then know how far it is to go until they themselves turn around. There are so many reasons to like this section of the course and it is now gone this year.

Sure there will be a little bit of this same feeling as runners coming back down Canal Road will see runners who have not yet made that climb up Foxhall. But there will be nearly three miles of a loop where runners have no chance to seeing one another and that wonderful feeling of camaraderie will be lost (see below): 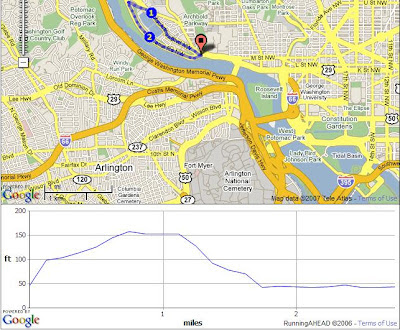 A major problem I see with this is how runners will come down a very steep section and then make an ankle-breaking turn which will completely neutralize any advantage that they will have from running down the hill. With the road closed at least another quarter of a mile until Chain Bridge Road, it makes no sense at all to not allow runners to ease out of there downhill run and then make a gradual turn on Canal Road. In addition, this extra length here will preclude runners from having to run past the finish at the end just to come back to it and THEN run up the hill to Iwo Jima. I am really at a loss why this is being done to tell you the truth.


Maybe I am making too much out of too little. I am rather sick today (actually stayed home from work because I feel like ass). But when it comes to 26.2 miles, you want everything little thing to be right.