When I knew I was going to Phoenix , I looked up my friend Jennie Rowles. Well actually Jennie Zonneveld now. And probably not Jennie anymore but damn it I have known her since were like 7 so she is always "Jennie" to me. Jennie had moved to he greater Phoenix area years ago and I thought it would be great to see her.

Of all the ironies, Jennie and some friends were actually running the Del Sol! I asked her if she was free for lunch on Saturday before the race (which takes places this Friday and Saturday, giving these race participants the chance to be a relayer on a leap day!). She said would I rather go to a BBQ with her relay team. I jumped at the opportunity.

I was excited to see Jennie as well. It had been over three years since I had seen her and I remembered the exact day. It was an easy day to remember: my very first time qualifying for the Boston marathon. It is a long story of how I got out there but it was at our10 year high school reunion that I learned Jennie was training for this race. I was training for just my third marathon ever and mentioned that perhaps I would have an excuse to come visit her if things went right. Well, they did not but my fourth marathon gave hope (this is covered in greater detail in the book I am writing) and then in Phoenix I was fortunate enough to have the chips fall in the right place. You know what they say about a picture? 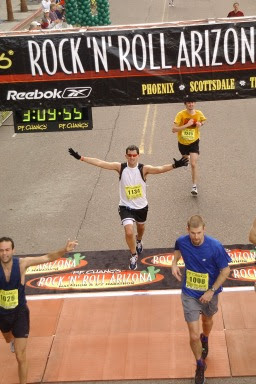 At the BBQ, Jennie introduced me to her running teammates but only half heard the part that I was with the race as an employee. I thought that this was going to be fun. People asked how Jennie and I were friends and Jennie recounted how she ran her first marathon in Phoenix and how, even though I had just qualified for Boston, had fought my way through the horribly crowded post-race meeting area to run back out to mile 23 and run back in with her. 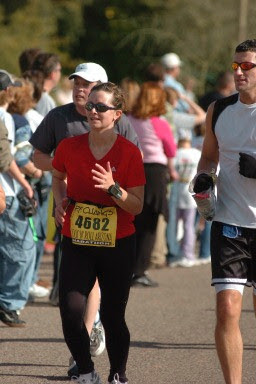 (Yep I am carrying my post race goodybag with my water, bagel, pretzels and medal et. al. Yep, I am wearing biker-shorts underneath much longer basketball shorts. Yep, I have no excuse for either.)


To this day I haven't the foggiest idea how I ran 6 more miles that day (Or the 3 more miles back to the parked car with Jen and he husband Paul. Where did you park, Paul? Wickenburg?)

After answering many questions, a few which were ultra-specific, one of the runners named Sean (who was not only a pretty humorous fella but one of the biggest perpetrators of the faux rule breaking brigade) piped up:" Who the hell ARE you, Dane? and how do you know so much?!"

Jennie says: "He works for the race".

Sean got mockingly embarrassed looked over at the cooler and said: "Can I get you a beer, Dane? Footrub?"

After eating, a few of us spoke about races coming up. Sean spoke about his desire to better his marathon time from the Rock and Roll Marathon in Phoenix in 2006. Here he is running (and yes, Sean, I can find anything). 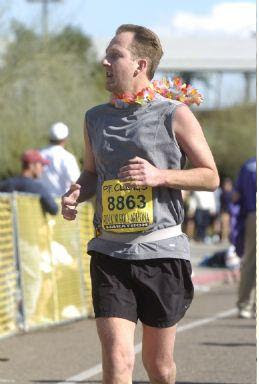 So I spoke with Sean some and said (well, to all really) if I could help them train at all with any advice, to please ask away. Well Sean took me up on it and I devised a training plan for his final 12 weeks before his attempt in San Diego to set a new PR.

Check back in a few months and I will update you on Sean's undoubted crushing of his old marathon time. in the meantime, send good luck vibes his way.

Sure, putting this out there can be a little embarrassing for Sean but no where near as much as this picture. 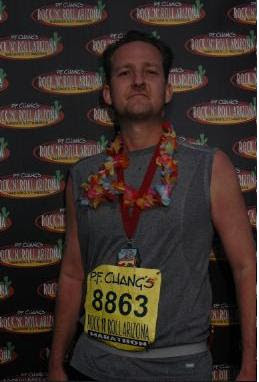 OK, let's talk for a minute. I found your blog via google (Ragnar Relay stuff). Ironically, you came to my place of work last month to share your experiences about running your 52 marathons in 52 weeks, something my jaw is STILL dropped about. Anyhow, my husband's family and I are all registered and ready to go for the Wasatch Back. Problem is, NOT one person on our team has EVER ran the race and while I know the Race Bible is great...I know it doesn't have all the lesson's learned and advice...so, you have any? Also, HONESTLY...there are about 6 people on our team who have NEVER ran a race (some probably haven't ran much in their entire lives!) - can they do it? We're just running for fun and are not too competitive about it, but you know, I'd rather we not WALK the whole thing or anything. What can you tell me?!?! I'm SOAKING up any information I can get right now! Feel free to email me if you have time... tarafears@gmail.com. (Any running advice is also MUCH appreciated as I still call myself a 'wanna be runner'...I'd LOVE to be better and maybe a little faster too!)

How's it going?! How're you liking your new environs & new job?! Hope you are doing well.

This experience sounds like you had such a great time!

P.S. BTW, just letting you know that I saw the comments you wrote on my Yelp page. Thanks so much for your kind & enthusiastic words of support!