My 20 miler in Arizona

When I mentioned in a previous blog that I was in Arizona for the week, two friends told me I had to check out the South Mountain Park area for a long run if I had the chance. Well, the chance presented itself and I jumped on it.

Saturday morning I got up, dusted off the shoes and headed out in the same general direction my previous two runs in the area had gone. However this time I hung a right and headed down Central Ave towards the Park.

even though the temperature was a brisk 48 when I started, I felt the clear sky would soon be making me sweat. SO I stopped at gas station to hopefully buy a thin bottle of power drink. Unfortunately, they only had the 32 oz honkers which was going to be a pain to carry. but since I did not know what lie ahead and I can hear my friend Christine in my head "You don't carry water for 15 mile runs?!", I decided to make the effort.

Now, I had looked at a few maps and plotted a course. My decision was to follow Central Ave to the park to San Juan rd until it ended. Then I would turn around and come home. Voila. 20 miles.

As I neared the entrance I saw an ominous sign flashing: "Park Closed until Saturday 2 pm". Well, sh*t. but cars were still going past the police officers so I thought I would eke by. With no problem I entered the park and began the winding part up the first major hill. 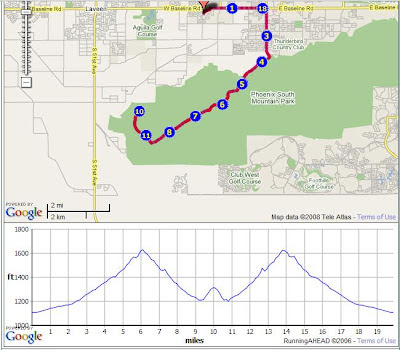 Soon I was in the midst of tons of people wearing purple shirts in varying sizes and shapes, all walking. I asked someone what was going on and they old me this was the Climb to Conquer Cancer Hike. Hundreds of people were snaking up the hill in front of me. I felt like an intruder for sure but decided to make amends later and plowed ahead. As I passed walkers, I heard statements like "He'll be walking soon." I smiled inwardly thinking "Not quite."

About 2 miles later, the hikers continued up the steeper part of the hill and I hung a right onto San Juan Road. Within seconds I was all alone. surrounded on either side in this canyon by cacti, underbrush and mountains. I literally came to a stop and uttered "Wow" outloud.

Here I decided to take my lightweight windbreaker off of my wait (it has lasted about a mile into the run before the sun got too warm) and tied it to my powerdrink bottle. I placed it on the side of the road and knew I would be back in 8 miles to pick it up and drink it. Heck, I knew know one else would be coming by to pick it up: the park was closed!

It was then I also decided that if the sun was going to be this awesome, then darn it I was just going to have to take my shirt off and enjoy it. If you know anything about me, you know I have to be REALLY secluded to shed the shirt. (There will be no picture; you are welcome). With the sun on my back and nothing around me I started to fly dwon the hills. It felt invigorating which was especially good as I have been dealing with that lingering shin problem (thank you Estes Park marathon!) more as of late. but here, as I wound down the hills, I felt like I was flying.

As I neared my turn-around I saw the only person who was also out and about. A female hiker with a kid on her back and a Doberman in front of her (named "Princess") she gave a friendly wave. She was hiking on the National Trail which I had thought about running on but since I was planning on a 20-miler, I figured the distace was enough. I did not need to add too much difficulty.

At the terminus of the San Juan Road, I had to crest a little hill. When I hit the top, again I was floored. I have always disdained taking pictures of beautiful vistas as I really do not think they capture the beauty of what I can see. but this one does a fairly decent job. As I had looped around the biggest part of the mountain, I was not staring, miles away, at downtown Phoenix.

Tearing myself away from this view and getting ready for the return leg, I turned around and was about 30 feet away from a coyote. Could this get much cooler?! I stared at it for a few seconds and said "Just passing through. Hope you have a good Saturday" and I swear it bobbed its head as if to say "No problem. Pretty day out, huh?"

I ran into the hiker a little way back down the road and told her she might want to leash "Princess" and was on my way. Down a slight hill then back up the last big climb I went. I grabbed my drink, put my shirt back on and then put my jacket in my hand. Joining the purple shirt wearers again, I began to soar past them on the descent. I am pretty sure I head "Hey, isn't that the same guy?!" It may have been the desert heat making me hallucinate but I thought it was funny anyway.

When I had stopped to get a drink earlier I had also taken $10 in cash back. Near the base of the hill, there was a jog to the right and tons of cars and a white tent set up. I ran over to the tent and grabbed the attention of what looked like a person in charge. I told her I felt bad crashing their walk and I hoped the $10 would make up for the inconvenience. then it was time to finish my run.

Out of the park, down the street, hang a right and then into my gated community (no gate jumping this time; I have the access code). Not a bad way to spend a Saturday. And by looking at the elevation of the way the hikers went I already have my shorter but far more difficult run planned for tomorrow.

Glad you finally heeded my advice and properly hydrated! :)