When I was running in South Mountain Park yesterday, I knew what I would be running today. I did not necessarily "want" to run it but I knew I was "going to" run it. It was the road up to TV Towers that service Phoenix.

Knowing this was going to be nearly as long a run as yesterday but much more difficult, I decided to drive the 3 plus miles from where I am staying to the park entrance. I parked my car, got out and started almost immediately going uphill.

The first 2-plus miles were exactly what I ran yesterday. But as I climbed, I looked to my left and saw what I was eventually going to be getting to. Hopefully, at least.


Even though Sundays in the park are "Silent Sundays" meaning there is no vehicular traffic, there was plenty of cyclists about. Runners and cyclists often simply "co-exist", each thinking they are never in the wrong and the other are a bunch of asses. Being aware there were some tight turns even on the parts I knew, let alone the winding trail to come, I stayed alert. More often than not I heard "runner UP!" in the foreground as they approached on their descent and they moved accordingly out of my way as I hugged the left side of the road. I thought this was a more than just co-existing and was pretty nice of them to do

I could not remember exactly how many miles it was to the top but I was thinking it was over 7.5 from where I started. So I put my head down and climbed. But not so much that I would not look to me left and realize that even just about 4 miles into my run I was already high above Phoenix below me.

As you can see from the twisty-turny route, the towers tease you (they are located on those white lines due north of mile 8 on the map below) as they look like they are close and then you veer away to run in a different direction. 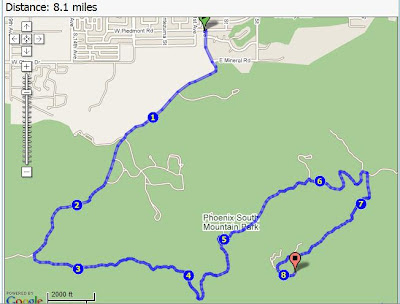 With about half a mile to go, a cyclist passed me and said some words of encouragement which I returned. About 100 yards later an extremely steep part of the road had him back close to me. "Nice run," he said. "You are going about 7.5 mph up this hill making us all look bad." I simply smiled as I didn't have much energy to retort. One of the other cyclists looked back to see who his friend was talking to and said: "Where the hell did you come from?"

The road flattened out and they left me in the dust as they climbed the last little hill to the top. When I got there a few seconds later, many of the other cyclists who had passed me on the ascent gave a few little whoops and a smattering of applause. Not too often you get that on a training run. One offered me a drink of water (I did not bring a bottle this time; Sorry, Christine) and remarked he couldn't believe I was running without one. I told him the sun wasn't out and it was only 15 miles so I was ok but I gladly accepted a swig.

I chatted with the group of guys for a few minutes and then clicked my watch to begin the run back down. If it had been sunny like it was yesterday, this is exactly what some of the turns would have looked like.

A few ascents on the the way back seemed to pop out of nowhere as I assuredly did not remember going down them on the way up. Within a few miles many of the cyclists flew by me at Mach 7 and shouted more words of encouragement. I crushed the hills as I love to do and in 8 miles was 10 minutes faster on the way back than I was on the way up. (1:06:22 vs 56:02). 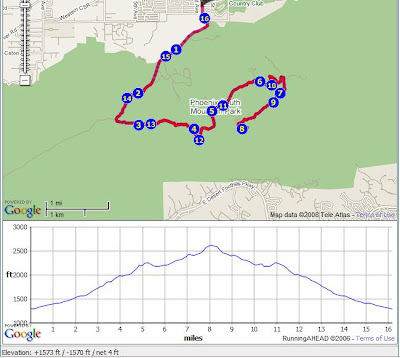 I turned around when I got to my car for one last look at what I had climbed, hopped in, and headed home for a drink and a shower.