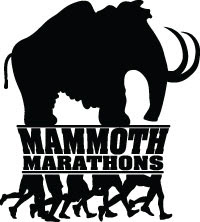 The mark of a good race (and really, a good person) is when they can readily admit errors.  I have worked with the Mammoth Marathon race series on numerous occasions and really like the things they do. A small race organization, everyone in the company chips in and some times some small things go awry.  For instance, due to a miscommunication, the half-marathon I participated in yesterday had us starting quite a way back form the actual starting line.  When I finished the race, one of the race directors, who knows I am brutally honest in my race reports and appreciates it as well (I think) said:

What other company would openly welcome that you chastise them for an error they make?  Very few, that is for sure.  That's the sort of people I like being associated with.  If you haven't run a Mammoth Marathon event, you need to.

This was a revitalization of an event that took place last year by another race company.  Mammoth did not know what to expect in terms of people and were pleasantly surprised when (I think) they quintupled last years entrants.  As such, the buses left a little later than we were expecting which was no big deal.  We were worried it might get a little warm later in the day but we were told that the start of the race at 9,000 feet would be much chillier than down here in the valley at 4,500 feet. 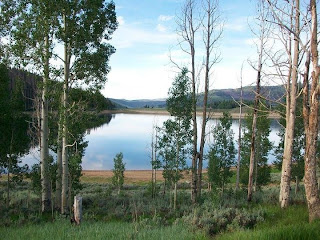 On the bus to the top, where I do my best pre-race sleeping, I was fortunate enough to make a bunch of new friends who recognized me from my blog.  ("I'm not sure if it is him," holding up an iPhone with my blog on it.  "Have him take off his shirt.") The vast majority of people were running either the 10k and the 5k.  The race would take the halfers to the start at the Cleveland Reservoir, start the race and then take each group down the canyon to their respective starts.  Was a nice way to get a little cheering section for each race start as well as have people to talk to on the way to the top.  What an awesome starting point too.


First 5k(ish)
When the half-marathoners lined up, we were told to start "right here at this bush".  I jokingly asked, "Are you sure it is not that bush?" Having run my own races with seemingly arbitrary start lines I know I can sometimes pick out a pebble from amongst others if I had been around the course long enough.  The starter counted down from ten and away we went!

A neat thing that the Mammoth Marathon races do with their mile markers is to count down.  Therefore, the first mile marker we would see would say "13 miles to go."  It gets rid of that pesky .1 or .2 left in races and is actually a nice device to help beat some of the mental fatigue. 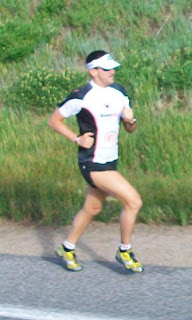 As the buses passed us on the right, I kept looking for that first sign.  Unfortunately, the first sign I saw was where we actually should have started the race.  Drat. I looked down at my watch and saw that over two minutes had elapsed since we started the race.  As I was using this race as a potential PR course, and was trying to run under 6 minutes per mile (and know I was at this point), that means we ran at least .3 of a mile before we hit the original starting line. Uphill. At 9,000 feet.


I have to admit I was a little disappointed but thought perhaps as mile markers need not be certified perhaps some of these markers were a little askew.  However, after cresting the hill and beginning the long descent to the finish, my next tow miles run aright around 6 minutes per mile showed me the markers were dead-on.  I had a choice as I reached the third mile:
a. continue to try and PR and then convince the race it needed to mathify our times based on our overall pace for the course and subtract .3 of a mile's worth of time
b. chalk it up to life's adventures and enjoy a beautiful 13 plus mile training run.


I went with option B. 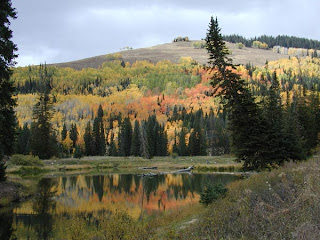 I knew that even if I sat a new PR I would not count it.  You can't use math to give yourself your fastest time ever.  You just have to run it.  So when I say I chose option B it was with a slightly heavy heart.  However, my pain was eased (if not my breathing) by the absolutely beautiful scenery we were running in.  A great deal of central UT is desert.  Mountains with stunning vistas but browness prevails.  I expected the same during this run.  I was wildly off.  I have often stated that I usually do not care about the scenery during a race- I am there to run hard and dont' have time to look around until later.  However, by easing off the throttle a little bit, I could take in the vast evergreen forests, sharp jutting cliffs and fish filled streams of the Manti-LaSal National Forest that were just a few feet off of each side of the road of the course.


As you may recall, the Crandall Canyon Memorial Run was established to pay memory and raise funds for the families who lost loved one ins a mine disaster that happened here a few years ago.  It was only fitting that this race was run in almost complete silence, save for the babbling brooks, breeze through the trees nearby and the occasional sound of a fire crackling from a nearby fire of a camp. (And whoever was cooking some sort of steak at 8 AM was extraordinarily cruel to me.  I almost had to stop the race and go have a bite!)

As all 130 people in the three races streamed by in this Canyon, I hope they were able to take in the view as I did.  There was a chill in the air (very odd since it would reach over 100 degrees just a few short hours and a few thousand feet below us later in the day) where our breath would create a small shroud of fog around us for just a second.

I was continuing to push the pace just to see what effect elevation had on me, even as I ran downhill and my breath was indeed ragged.  However, I had taken a dosage of Oxygen4Energy right before the race and felt that it had indeed helped me through the first challenging 7 miles where the altitude was the highest and there was the occasional small bump of an uphill.

Soon the finishline emerged, right at the base of the road that led to the mine where the terrible accident occurred.  There were a smattering of 10k finishers and their friends and family onhand cheering on the runners.  I finished in a time of 1:27:55 and was fortunate enough to win my third Mammoth Marathon race in my career.  I think I might have to invest in a "finish" tape for the Mammoth guys. 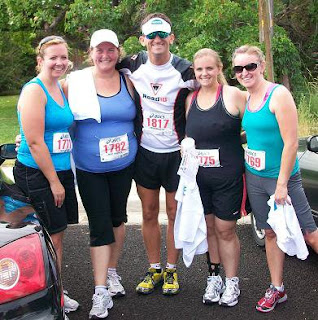 After the race, I got to meet with a few of the runners who had traveled the same course with me and make some more new friends. sure the PR attempt was shot from the very beginning, but enjoying such a lovely day, on such a gorgeous course was quite the reward in itself.  I hope everyone else had just as a lovely time as I did.


They would be hard pressed not to on this fantastic day.

Great job Dane! That was a great run. The scenery was great too. I grew up fishing and camping in that same canyon. In fact, it was in one of those streams where I caught my first fish.

Thanks for the recap...the run seems interesting and have lot of fun...:D