It is a little odd how I came to run this race set in nearby Park City.  I had it on my calendar a few months back thinking it would be a fun race to do while I was home on a rare weekend.  Then a potential working opportunity arose on the same weekend and I shelved the idea. When that dissipated I kept Jupiter in my mind as one to run.  I did notice however, that it was only one week before the US Aquathlon Championships which I wanted to go to once again and make the US National team and improve on my showing from 2009. As such, I was wary about such a challenging race as the Steeplechase before this event and again put the idea on the backburner.

Fast forward and the US aquathlon idea was killed and in its place a local triathlon popped up.  Unfortunately, I caught wind that the race may not be run after all and therefore forgot about even trying.  Lost in the shuffle was the Steeplechase itself.  When I was at the Outdoor Retail show this week, someone mentioned the race and I figured, well, I am here, I am not doing the aquathlon, or the triathlon, I might as well do it!  Then I walked the exhibit floor meeting with sponsors I have and sponsors I may have for four days completing exhausting myself.  This followed an epic trail run of close to 20 miles with a fantastic group of runners who were in town on Monday night.

(As an aside, I almost wrote a posting about this run itself as it was so wonderful but time got away from me.  At one point, I looked around these runners and thought: "I could quite possibly be the least talented runner of this entire group." I could list every person and detail their awesome achievements but suffice it to say it was an honor to be running with them all. I also need to lose about 40 lbs if I want to keep up with these trim athletes!)

As such, digression aside, I did not know what to fully expect from this run.  Unlike road races where the terrain is usually a given, I would just have to rely on the word of friends about how this course was groomed.  I was told that it was almost completely runnable in terms of footing etc and that turns out to be true.  However, the race does indeed start at 7,000 feet and over the course of 8 miles climb another 3,000 feet to Jupiter Peak before coming back down again!


I have always said to know one's own weaknesses.  The next best thing to do is to work on those weaknesses.  For me, one major weakness is uphill running on trails.  I am terrible at it.   It doesn't behoove me much to spend a great deal of time doing it  as I don't really race trails that much.  I have however created this Galloway-esque run-walk method that usually keeps me right in the thick of things while others are purely "running" (I use quote because at the speeds we maintain, in spite of the effort that is being put out, I doubt anyone would call it running!) I knew I would be using that tactic during the race on this day.

First Half to Jupiter Peak:

Right off the bat, one of the hardest climbs arises before runners.  Well, at least it was the hardest for me.  Knowing I barely feel human until 6 miles into any race, to start off with a steeply vertical climb, after standing still at 7,000 feet, I am aware I am not going to feel great.  I ran for a bit and then began employing my run-walk method.  This would come back to haunt me later on in a few places.

This was just a lovely day to be out running.  While a tad sunny and warm at the start, I knew it would get cooler on the backside of the mountain not yet exposed to the sunrise, as well as being at even higher elevations.  After about 8 minutes of run/jog/hiking, the course made a right-hand turn off of the gravelly road we were on and then started onto the single track trail which would comprise more than 90% of the course from here on out.  For those not in the know, this single-track trail makes it virtually impossible to pass another runner without encountering uneven footing, possibly a stray elbow and maybe a branch or two to the face (of which, the latter, often occurs anyway when you are 6'1''.)

I soon realized how taking it "easy" at the beginning had saved my lungs and legs for the latter portions of the climb to the top, as well as the descend after where I expected to make up mondo amounts of time, but it also put me into the conga line of runners in front of me with very little room for escape.

I was able to find room here and there to dart passed a few runners but was hoping the rest of the climb would have some wider road portions where that would be easier.  Fortunately, that was the case and I employed the run/walk method very effectively here.  My plan was to get to the Jupiter Peak halfway point in about 90 minutes and then hopefully come back down in 60 for a nice even time of 2:30.  I knew it would put me no where close to the leaders but would indeed be a good time for me.

About 6 miles into the run or two miles from the turn-around, right on schedule, I felt better to the umpteeth degree, my breath stabilized (even though we were now around 9,000 feet) and I didn't walk another step until the base of Jupiter Peak.  I passed a dozen or so runners in this time and felt pretty good.  Then Jupiter Peak loomed.  I could see dozens of runners on hands and knees SLOWLY moving up the side of this hill which seems like it was set flat against the horizon.  Only thing to do is get down and follow them.

About halfway up, I heard someone mention a "false summit" which refers to how you feel you are at the top but then there is more climb to go.  At one point the climb evened out for a second, and I stopped to take in the fantastic view.  I figured this was the false summit they mentioned and continued onto the top.  Touching the flagpole, as per tradition, I pulled over to use the non-existent bathroom. 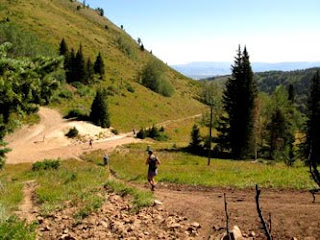 I made mention of a turn-around but the course actually follows some similar parts of the first portion for the descent but uses a fair amount of different trails.  To make a specific note here, these trails were very runnable.  Well-groomed and free, for the most part, of roots, rock and debris, it was easy to actually run- well, when you could breathe.  As I began to formulate my plan of how to overtake as many runners as I could, I could see a few hundred yards in the distance runners were climbing a second peak.  Well, crap! The false summit I had heard of was actually Jupiter Peak!  Now this second hill was no where near as hard and within 10 minutes from cresting Jupiter Peak (including potty-break) I was ready to begin my descent.

Unfortunately, my descent was blocked, in some way, by other runners who I was catching but could not pass because of the thin track.  This is by no means their fault.  It is my responsibility to either let them know I want to pass and they will step to the side, or I simply have to go around.  However, there wasn't much space to go around and since we were descending at such a great speed, I did not think it was right to ask anyone to step aside.

So I bid my time and just tried to enjoy the absolutely gorgeous scenery all the while picking places to make a move.  I began to feel a blister forming on my left heel. I get this blister even when I am running on roads (most recently I recall getting it on the descent of the Ogden Marathon where I set my personal best last year.)  It seems to simply be a by-product of my running style/stride.  I don't run enough races with enough downhill to really have a test sample to figure out the problem.  This blister slowed me a bit but not all that much.

I continued to pick runners off and finally could see the town below in the not to distant view.  There were a few mountain cyclists on the train which we could have done without but most were pleasant and moved their bikes to the side.  We hopped off the trail and had about 100 yards of pavement running before the finish.  I felt a little bad passing two more runners in this little stretch but having tip-toed through a great deal of the single-track trail I felt I was ok in hitting the road and using it to my advantage (if I had one.)

Just a little bit off of my descent goal with a 1:01:52 second half, I was still able to eke out a 2:28:29, good enough for 47th place overall in the male division.  Four superb women beat me to the line, keeping me just out of the top 50 overall.

Hardly my best performance in a race (I was also quite cautious of my achilles as the uphill and downhill nature of the curse could have wreaked havoc on it) but one I was actually quite pleased with in the end.  I beat my desired goal for the day and met a veritable plethora of good people.