You do not need to be a runner to care about the social, ethical, and moral coincidences of the saga unfurling before our eyes regarding the South African gold-medalist Caster Semenya, 18, who reportedly has both male and female organs. If you are not up on this story, Semenya absolutely crushed the rest of the field in the 800 meters in recent events by such shockingly wide margins that usually she would be on the cover of all the magazines because of her stellar efforts. Unfortunately, Caster looks like this: 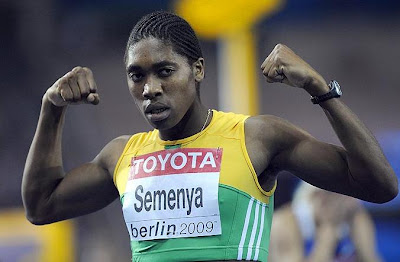 And just about everything else about her seems to smack of traditionally “masculine” characteristics (including her voice.) This has drawn into play the difference between sex and gender, how athletes who may have had a sex change should be viewed in the world of sports, and a plethora of other issues that have just a modicum amount of precedence to allow most of us to even begin to form an opinion. Of course that doesn't stop most people! That said, I look at this from a variety of standpoints:

1. It is unfortunate that running must have such a "scandal" in order to get actual airtime on mainstream sports sites like this article in ESPN but at least it is on ESPN!

2. This is FAR bigger than running and allows us to open new airwaves of communication about what is male and female and which should be allowed to compete in which sport.  Furthermore, should we create a third category for those who fall in between the accepted standards for each gender?

3. Is this both racist and sexist as the South African government has claimed? Regardless of what happens, you do have to feel sorry for Caster. Without a doubt she has had no choice in how she was made and is only doing what she can with what she has. Unfortunately, what she has may be much more than those she competes against.

I think it's really unfortunate that this all had to come out at the World Championships. Didn't someone notice this BEFORE Berlin??? I do feel sorry for her that this had to happen on the world stage. However, I couldn't help but laugh when I saw Caster's makeover. I can't imagine it helps the situation much!

Hard for me to really add anything of value to the subject. The Sports Scientists guys are usually pretty good and I thought it would be good extra reading for anyone interested in the topic.

Well what you just said is enough! Didn't know if this was a rebuttal, a refutation or addition.

Here is what I wrote to our freshmen Health Sciences students in the current study guide:

"We tend to think of gender as a black-or-white distinction (certainly, forms have only two blanks under "sex"), but, in fact, a surprisingly large number of people are intersex -- between 0.018% and 1.7%, depending on how one defines it. Even taking the lower estimate, the number of intersex individuals in the US alone would be more than 50,000."

I have references if anyone's interested. It's a fascinating area, and may change your mind forever about things you've often taken for granted.

I can see both sides of this, though. I would like to see everyone compete, and it makes me sad to read in Zach's link that four athletes had to end their careers because they fell in that small percentage of intersex individuals. We could create an additional category, but then it seems to me we would have to create categories for athletes based on (say) lung capacity or lean muscle mass or something else and pretty soon everyone is first in their class of one.

Extremely well-put. There must be lines. And while 50,000 potential US citizens may be in the inter-sex category, I think it is impossible to create a third category for them to compete. As you eluded to, would we have a category for those with a 70 or above VO2 Max and one for under?

How difficult would it be for an 18 year old to be going through all of this? Adolescense is diffucult enough without worldwide exposure such as this. My heart goes out to Caster.