A year ago I had the honor and pleasure to be the winner of the inaugural Little Grand Canyon Marathon in nearby Price, UT.

The start of 8 consecutive weeks of racing (including 5 marathons, 2 halfs and a 12 day race), I had no idea what to expect out of the race. But I was able to pull out the victory, and experience one heck of a site. In fact the pictures are so beautiful from that race, that one of them has been the header for my blog for almost a year now. Here is another one. 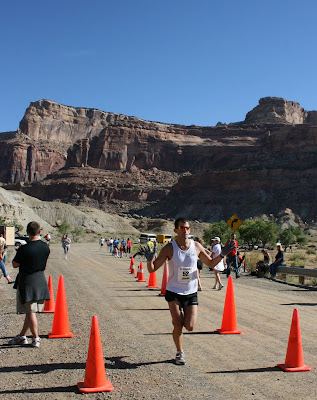 Happy to see the end and no longer fearing the possibility of being passed!

I had every intention of defending my title as winner until my recent run-in with a vehicle while training. As such I had no idea when or if I would be racing at all in September. Fortunately, my healing has been going along smoother than expected and while I will not be able to race the full marathon, I am extremely pleased to be running the half marathon in its place. As the real gem of this entire marathon is the second half, I think I have made a wise decision. You can see from the elevation profile of the marathon (the half starts at the halfway point), that this is indeed my type of race!

I am also happy to announce I will be signing books at the packet pickup for the race itself. The organization which puts on the Little Grand Canyon Marathon is called Mammoth Marathons and they put on top-notch smaller marathons. It is my pleasure to be working with them again and I hope to be at many of their events in the future.

So if you are in the SLC area (or anywhere for that matter!) and are looking for a beautiful and fast half, come join me this Saturday!
Posted by Dane at 1:56 PM

I thought the reason you had that pic up was because of the amazing thigh muscle!!! :)