Continuing with the marathons I will be attending, racing and speaking at this fall, I am happy to add the Manchester City Marathon to my schedule. 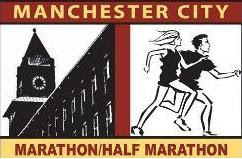 This race came to me as kismet when an opening presented itself rather unexpectedly on the Halloween weekend. I was emailing with Bill Rodgers (which never ceases to amaze me that I do) and he mentioned that it was a shame we would not see each other until the Mississippi Blues Marathon because he missed me so much and I am the bestest in the whole wide world. Ok, he didn't say all of that, but he did mention it was a shame it would be months until we crossed paths. When comparing schedules, I saw that Manchster fit right into my newly created vacancy of free weekends. Before long, the next thing I know I will be presenting right alongside Bill at this race!

I am happy to be able to not only knock off a state I have never run a marathon in but also to begin working with a race in only its third year. On top of that, I am always impressed when marathons decide to place their race date on the same day as a well-known race, let alone one just a few hours drive away. In this case, I am talking about the monolith of Marathons held in NYC on the same day. Having the chutzpah to say "Screw it, we are going to have our race the same day anyway" is impressive and something I am happy to take part in.

Plus I get to see Bill. Hard to top that, right?

So if you were not fortunate enough to get into NYC through the lottery (or you are not Sean Combs or Katie Holmes) and are looking for a race the same weekend I would highly suggest you take the trip up to Manchester. For whatever reason, flights into this area are relatively inexpensive from places as far flung as Salt Lake City and having passed through the area once when routing a potential race, I have to say that I am excited to return. the weather promises to be pretty danr perfect for a fall race and the views look like hey will be hard pressed to beat. Look forward to seeing you there!
Posted by Dane at 12:38 PM

I am a member of the Mancehster Marathon Association Board and I am so excited to see your post! I look forward to meeting you and Bill at the marathon and thank you for your positive words. We offer a beautiful and somewhat challenging course that has recieved great reviews.

Wave to my parents! They live just up over that hill in the picture ;)

It am very happy to be working with your marathon and feel we will have a great time!

Have them come cheer me on! :)

Hi Dane,
I am really looking forward to meeting you. Great blog! We promise that you will have a gerat experience here in Manchester!
Sarah
Manchester Marathon Association