* If you haven't seen the video of the little girl throwing the ball back her father gave her at a Phillies game after he mad a heck of a catch of a foul ball, well, then you must not have the internet or watch TV. It has been everywhere. And, it is pretty darn cute.

What I am more impressed with than the dad's catch (or even the heck of an arm on the girl) is his reaction. Fans go to the ballpark for eons without catching a foul ball ever. This chap makes one great stab and plunks a ball from the wall in front of him and then watches it disappear as his little tyke launches it into the stratosphere. After the initial shock of realizing a small piece of history had been tossed away like chum and, according to the girl's (Emily Monforto) father Steve, seeing that Emily thought she did something wrong based on the fans reactions, he embraced her in a hug and could be seen telling her that it was "OK". sure that is what a Dad was supposed to do but I am still impressed. There was barely a nanosecond of regret in his face, captured by national television cameras. Way to go Steve! 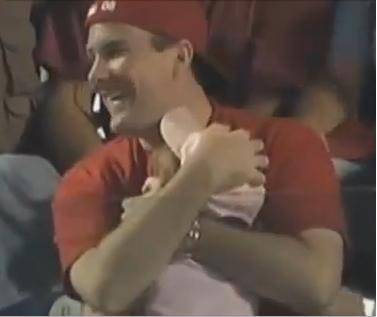 * Tom Brady, QB of the New England Patriots has been vilified by some for not stopping to talk to Suzy Kolber, an NFL sideline reporter after the narrow escape over the Bills Monday night. The thing is, while he did not necessarily stop to talk to her, he did not blow by her or ignore her. In fact, if you watch the video you can here him saying something along the lines of "I can't hear you." did he sit down and give Kolber a Monday night Conversation? No. Did he find it a little annoying that she was there when he was trying to shake hands? Probably. But he most assuredly gave her the answer to her questions. I mean, sideline reporters have always been pretty useless as have post-game questions. "What this how you expected the game to go?" "How do you feel about that fumble?" Stupid.

Believe me, when a guy who went to Michigan and who looked like this on draft day: 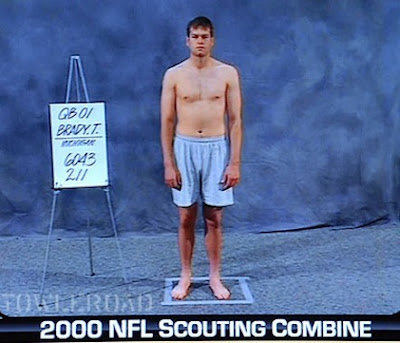 gets drafted in the late rounds of the draft but ends up winning three Super Bowls and starts dating a girl who looks like this:

I don't need much reason to be jealous and dislike him. But, this Kolber interview not it. Tom did what he needed to do and nothing less.

* I might just lose my mind if the Bears lose to the Steelers this weekend. Just saying. Red Sox and Yankees fans think they know hatred for a team. They are WAY wrong.