I often am asked how I can be so up for running all the time. The simple answer is I am not. sometimes I just plain and simply do not want to get out the door. But there is never a time when I come back from a run that I am not happy I went and did it. I feel better, my mood is light and I know I am doing something good for me. And I don't need Scientific American to devote an entire article to whether it really does. Then again, apparently scientific evidence is necessary for some people, like the one who said to me at the Women's Fitness Celebration this past weekend: "You can't be enjoying yourself. I never see a runner smile." To wit I returned: "Do you smile during sex?"

But today was one of those days where I could not decided when, how far, and where I wanted to run. I finally decided to do this run that I do not do often enough. A nice 9.75 miler with some good climbs through a park or two and finishing with a downhill kick.


I knew it has been quite some time since I had done this exact course but I did not know how long. So I looked back in my trusty running spreadsheet. And looked. And looked. February 20th?! Seriously? I cannot even begin to tell you how much my life has changed in the past 7 months. Well, time to go log this run.

Almost immediately after the first mile, I am met with a 150 foot hill in about a quarter of a mile. I know very well it takes me a few miles of running to ever feel good and this hill always leaves me winded. But today it was really hurting. I know I still not have come back from my car injury and realize it is going to take a little longer than I had hoped. So my mind begins to wander. Some people listen to music to escape; I listen to my thoughts.

One thought in my mind was the recent arrest of Roman Polanski. If you aren't aware of what good old Rome has done, well basically, he pled guilty to the statutory rape of a 13 year old and then fled the country. (By the by, is anyone else surprised that French Culture Minister Frederic Mitterrand was quoted in French media as saying, "In the same way that there is a generous America that we like, there is also a scary America that has just shown its face." Ah, the French!)

There is scads of information out there about how he was mistreated poorly by the judge and the system but he has never denied that he had consensual sex with this young girl. Well, in a recent forum discussion, one person actually was saying that Polanski is a scapegoat and should be left alone. In fact, this person followed it up with "it was 30 years ago, she says it was consensual, and she's not suffering. let it go."

In spite of the absolute lack of logic, knowledge of the law or apparent common decency shown by this poster, I felt I would try to see their point of view. After attempts to get my head that far up my ass failed (*rimshot*), I tried to just play devil's advocate. 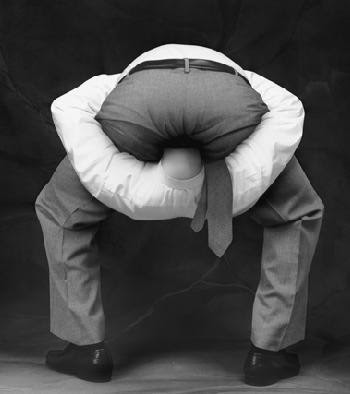 The law is not black and white. After three years of law school, clerking for a judge and working alongside the field for numerous years, I know there are (and HAVE to be) shades of gray. Let's give a scenario.

Pete is 17. Mary is 18. Mary turned 18 on Feb. 1st and Pete is set to turn 18 on Feb 2nd - Groundhog Day. Pete is from Punxsutawney and invites Mary back with him to celebrate this holiday in his hometown and see what it is all like. Mary obliges and is taken by the quaintness of this town. At 11:50 P on February 1st, Pete and Mary begin fooling around. at 11:55, they have sex. In the throes of passion Mary lets out a squeal that an off duty police officer here outside their hotel room and fearing the worst breaks down the door. At 11:56 PM, the off-duty police officer catches the lovers in the act of coitus. at 11:57 PM, Mary could be arrested for statutory rape. (More or less. Just go along with this.) Is this ridiculous? Yes! Would it ever be prosecuted? No! Shades of Gray.

However, in 1977 when Roman had sex with the 13 year old, he was...wait for it...44 years old! The defense of many have been that the sexual was consensual. The 13 year- old was fine with the sex and was able to make the decision upon her own free will. This is ridiculous. in this day and age, 13 year olds cannot make a decision like that with any knowledge or basis of what they really want. When I was 13 (and yes this was longer ago then I would like to admit) I thought that growing a mullet and wearing neon orange spandex shorts (with nothing over them, mind you) was a good decision. and as much as I wish I was kidding about both of those, I am not. And I consider myself to be a pretty level-headed chap! What sort of informed consent was this 13 year-old, plied with drugs and alcohol given to the ever so suave Polansky? That would be very bad informed consent.

I am thinking over this again and again and the next thing I know I have made the loop around Sugarhouse Park. I am 4 miles into a run that I was dreading and was killing me at the beginning. I know begin to feel great. I keep on running and finish in a decent time of 1:14:11 or 7:38 minutes per mile. Mine time in February? 1:12:47 or 7:28 minutes per mile. To be honest, it was slower than I was hoping for when I started but all things considered I had a good run. I saw an 1957 black Mustang that I so want to buy for my mother; caught glimpse of a sign for Elena and Mary's wedding, which, assuming both of them were women, shows great progression in conservative Utah; caught a pass from a little fella who threw me a football from his front yard (and then immediately thought: "Shouldn't he be in school?") and came home, exhausted and tired.

And happy. I didn't even need the smile. Because, as my friend Tiffany says: "Every time I go for a run, I see the finish line in front of me."

ike the one who said to me at the Women's Fitness Celebration this past weekend: "You can't be enjoying yourself. I never see a runner smile." To wit I returned: "Do you smile during sex?"

Very, very nice. I may borrow that one.