For over three years I have cultivated a friendship with someone I have never met. In this day and age, this is hardly that odd but it is still not ideal. So, trying hard to always look at the bright side of things, when the accident I had a few weeks ago put me on the shelf and kept me from going to the world Aquathlon Championship in Gold Coast, Australia, I realized that the free weekend would allow me to actually meet my friend.

That friend is the well-known ultrarunner Lisa Smith-Batchen. The weekend in question was Labor Day and the reason for the meeting was the Grand Teton Races. A trail marathon, a 50 mile race and a 100 mile slugathon were what highlighted the weekend. It is always difficult to be at a race weekend and not race but even though I had begun running again a week ago, I knew I was in no shape to try any of the races here.

Lisa invited me up to do a book signing and soak in all that happens during a race weekend. There was no better place to do so then just over the Wyoming border in the shadow of the Teton mountains. I had the pleasure of being the house guest of the Moeller family with the matriarch, Patricia attempting her first ever marathon. Quite the race to do so given the starting elevation, terrain to be crossed and changes in elevation throughout the course. But with Lisa as her coach and the fire I could see in Patricia’s eyes, I knew this would be a successful race. (and in her first marathon ever, Patricia proved me right by almost breaking the 4 hour barrier in a phenomenal 5:01:27 for 7th overall and 3rd woman!)

The weekend brought me to meeting tons of new people and getting in touch with plenty of old friends. Bryon Powell, a running friend from DC was on hand to pace a friend of his through parts of the 100 mile race. Bryon is another lawyer who has decided that the courtroom did not bring neither as much justice as the footfalls of dirt and road under feet do and has left the greater DC area to seek running solace near the Yosemite National Forest. The creator of the highly read iRunfar blog, Bryon is also quite the accomplished runner in his own right. It was great to catch up with him after many moons of not being in the same place at the same time.

I also had the pleasure to spend more than a few moments with Sister Mary Beth Lloyd who is the inspiration for Lisa’s fundraising projects and also her godmother. On top of that, she is an ultrarunner as well. Competing in full habit, Sister Mary Beth successfully eluded me most of the race as I tried to catch up to her to lend a hand in her racing efforts. It seemed every time I would finish helping someone through a small portion of the race, and then scamper back down to find her, she had already skedaddled off onto the trail to crush another part of the Tetons! With her father Buddy on hand to lend a hand and cheer, this dynamic duo were enough to inspire anyone. Sister Mary Beth would go on to run nearly 2 hours after than she had previously on this tough 50 miler! Lisa and Sister Mary Beth in Badwater.
I am sure Sister Mary Beth who blush or wave her hand as such words but I know I was not the only one who realized how much more we can do with our lives if we just make the effort. Called by some the “New Age Sister Theresa”, Sister Mary Beth received the “Servitor Pacis Award” from the Vatican’s Mission to the United Nations for her work with AIDS orphans in June 2008. The “Path to Peace Award” is given annually to the one person in the world who most exemplifies the work of those who have dedicated their lives to helping the neediest among us.

Now I mentioned I was doing a little bit of pacing and this was completely off-script. At one point, Lisa mentioned that one of the runners she was coaching was having some difficulty and probably could use someone to give her a little pep as she climbed the 2.7 miles from the main base camp of the course (which featured many separate loops to bring runners back to the starting point) to the Fred’s Mountain the highest point on the course at 9,840ft. I was only happy to oblige as I had been itching to help out all day and here was my chance. The runner I had the pleasure of hiking up the mountain with was named Sarah Thomsen and I could see that she had the energy to keep going but that her ankles were hurting her fiercely. As some bandaged up her feet, I played with her shoes a bit and employed some shoelace-tying technique to try to not only relieve pressure of swollen feet but also help support the ankle. Then away up the mountain we went. 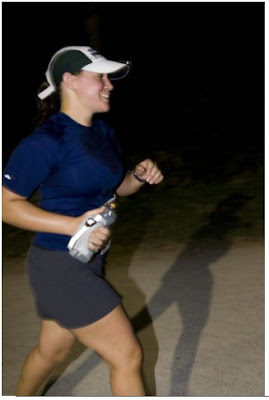 Living in Texas, Sarah was not quite used to these mountains or this elevation but gamely pressed on. As we neared the summit (where I would hop on a ski lift and scoot back down to the bottom to try and catch Sister Mary Beth) her paced quickened and her ever-present smiled broadened. We caught up to another runner also doing the 50 mil event names Angela Autry who was also from Texas. Soon the two ladies were chatting away and their pace quickened even more. While I could tell Sarah was hurting (as was Angela) I knew that as a three-time Ironman finisher, Sarah would be able to push herself as far as intelligently possible to finish. And if the time came to withdrawal she would have the smarts to do that as well. I left Angela in her capable hands when we reached the top and one sweaty hug later I was whisked to the bottom.

As I mentioned, I missed Sister Mary Beth but was asked to crew the women’s leader in the 100 mile race for a 14 mile loop. As much as I sorely wanted to, I knew I was not in the condition to do so. With the sun setting and my ribs and shoulder still healing, the last thing I needed to do was hurt myself when I was supposed to be helping. What made the decision even harder to make was that the leader, Ashley Nordell, was a girl I had met a few months prior when I had been running through the Backbone trail with my friend Jimmy Freeman when he was doing a 70 mile run for the heck of it. Ashley had run with Jimmy for a large portion of the first part of this trail and we had met and chatted for a few miles before she had turned to end her running day after some 30-odd miles or so. But I feel I made the best decision for all involved and loved that Ashley finished not only first woman but second overall in the entire race with a time of 23:03:39!

I has the pleasure to run into another running friend from DC, Kira Matukaitis who I had not seen in years as well. Pacing Sarah up Fred’s Mountain I heard a “Is that Dane?!” and was enveloped in a hug by Kira who finished very strong n the 50 mile event with a time of 16:11:22. Also participating in a very difficult challenge was another internet running friend, Tony Portera who not only did the 50 miler on Saturday but turned around and did the trail marathon the next day!

Everywhere you turned there were tales to just make you shake you head at what an amazing thing the human spirit is. Runners of all shapes and sizes competed in the various races. Just two weeks after a third place finish at the ever-difficult Leadville 100 Mile trail Race, Duncan Callahan obliterated the course record in the 50 mile by FORTY minutes in notching a 7:33 winning time. Just amazing. 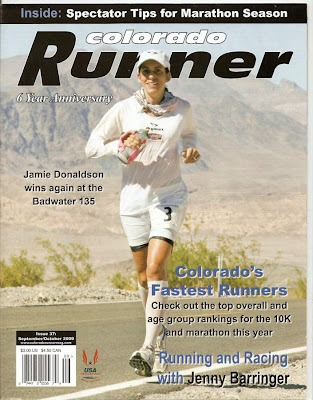 I also got to spend time talking with Sean Meissner, another heck of a runner who at one time held the Tahoe Triple record. That record included running three marathons on consecutive days, around Lake Tahoe. Averaging under a 3:10 per marathon, at elevation, Sean was one of the people I originally used as inspiration to show that running marathons with very little recovery was possible.

In just a few dozen of runners, the records and accomplishments that surrounded me were absolutely awe-inspiring. It truly made it possible, on a day when I knew there was no real good reason for me to run but very little convincing would have been needed to get me to give the trail marathon a shot, to simply sit back, sign a few books and enjoy the aura that is a race weekend.

I could go on for paragraph after paragraph of all the other stories I heard or witnessed this weekend but I do not think I could truly do all of them justice. I highly suggest you make your way up the Tetons next year or to one of Lisa’s many training camps across the United States very soon. You will see there are no reasons why you too cannot be a truly inspiring story to those around you when you too crush obstacles in your path and achieve the unthinkable.

Thank you to all who made this weekend wonderful. Best of luck to all of you in the races you will be undertaking!
Posted by Dane at 8:49 PM

Dane..so wonderful to see you live and in person..just sorry we did not have more time together. The door is always open..I can't wait to read your book.
Thank you for making our race weekend so great
Lisa

Hey Dane ! Really great to finally get to meet you at GTR. Hope to see you again real soon.

Dane, Great to see you, as well. We'd just missed each other so many times it was getting ridiculous.

It was great meeting you this weekend! I really enjoyed having your company walking up Fred's. Hope to see you at WRM this year :0)